SHE’S one of the most photographed celebrities in Australia at the moment but, for now, Samara Weaving reckons she’s happy just to land a gig. 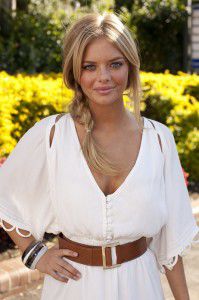 She’s being modest, of course – the former Canberra girl has been hot property since she landed the role as Indigo Walker on long-running soap “Home and Away” – a show that’s been a launch pad for big-name stars such as Guy Pearce, Chris Hemsworth and Heath Ledger.

It’s not difficult to see Samara’s name in lights, too, but again, she remains modest when asked about plans for Hollywood: “I don’t really think about it too much…I’m just going day by day,” she says.

Born in Adelaide in 1992, Samara and her family moved to Canberra in 2005, where she attended Canberra Girls Grammar and began taking part in theatre productions, finding her craft in acting.

“I loved acting, I was always getting involved in theatre groups outside of school or short films on the weekends, and I was drama captain at school,” she says.

Her first gig was a role in the television series “Out of the Blue” in 2008. A year later she was offered a role in “Home and Away”.

Initially a recurring role, it soon became a permanent one, leading her to swap her life in Canberra for “Summer Bay” in Sydney.

Samara says she always wanted to be an actor, despite being withdrawn as a child.

“I was quite shy when I was young, I think a lot of actors are, I think people have the presumption that because we put ourselves out there we must be extravert, but it’s very misguided,” she says.

“I really can’t think of anything I’d rather do, acting doesn’t feel like a job to me.”

It’s a career where she’ll never be short of advice – her uncle is actor Hugo Weaving, who has starred in films such as “The Matrix” and “Priscilla: Queen of the Desert”, and her father is former director of the Canberra film festival, Simon Weaving.

“We’re a very creative family, so of course we talk about what we do and swap stories about our acting experiences,” she says.

Despite moving to Sydney, Samara says she visits Canberra often, to see friends.

There’s not much downtime with her schedule though – “on a typical work day I’ll either be at Palm Beach or the studio and be in hair and make-up for 40 minutes and then rehearse the scenes with the cast members, discuss it with the director for a few minutes and then we’ll shoot it,” she says.

“In my downtime, I’m usually exhausted so I’ll sleep and eat and watch ‘The Mighty Boosh’ and catch up with friends.”