THE austerity ideology is dragging our city and our country down. 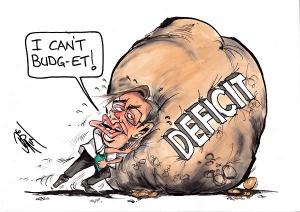 While other nations around the world look at the success of Australia in weathering the Global Financial Crisis, our Federal politicians seem to be arm wrestling to see who can undo these achievements.

The impact is already being felt in Canberra and it will probably get worse.

There is no better indicator than the jobless figures. As governments compete to see who can be the most austere, ordinary people suffer. The drive for more and more austerity means cuts in public service positions with flow-on effects that impact on Canberra more than any other part of Australia.

Unemployment in the ACT has worsened, bucking the national trend, as a direct result of public service cuts. Two and a half thousand jobs were cut from the public service in the last six months of last year. The “efficiency dividend” has been driven by a Labor Government that the conservative Joe Hockey considers is soft on austerity.

More than 10,000 people in Canberra are looking for jobs. The ACT has not had this number of unemployed since 2001. Cutting public service positions has a knock-on effect that creates a downward spiral. With fewer people working there is less money going into the economy, fewer jobs in retail, fewer people buying homes, less work in the building industry and less money going into shopping, eating out and other job-creating discretionary expenditures.

In a blind drive to get the Budget back into surplus, it seems that our leaders have forgotten the other aspects of good budget management. Of course, as a nation, we have to plan to come back into surplus. But, firstly, it is not a panic issue! Secondly, austerity is not the only way of doing it. For years governments have been reducing the taxation burden on ordinary citizens.

Increasing revenue is one option. At least both parties accepted this as part of the solution for Disability Care. More important is ensuring that the wealthy pay their fair share of the tax burden. Ken Henry provided the Government with options in this area – but the politics of austerity seemed to have outweighed commonsense. With financial philosophy driven by the ultra-conservative think tanks, raising more revenue has become a weakness in the public mind.

There is a disproportionate burden borne by Canberrans when cuts are made to the public service. However, other Australians will come to realise what happens when severe cuts slash through the bureaucracy. Ask Queenslanders. There will be longer waits, less services, slower implementation of policies. We can expect to see running down of infrastructure.

For the leaders of major parties, Canberra proves to be a good target. At the moment there are no political risks for them. Although local members work hard to try to protect their constituents they have little hope of being successful.

With two safe Labor seats in the House of Representatives and a safe Labor Senate seat there is not much risk for Julia Gillard. Senator Humphries, when besieged by his own local Liberal colleague, admitted that Opposition Leader Tony Abbott was intending to slash and burn the public service. The honest assessment by Senator Humphries is that the Liberals are confident they can hold the one Senate seat they have in the ACT.

There is no reason for the leaders of major parties to care what happens to Canberra. And while Canberrans continue to vote the way they do this will not change.

Perhaps the ACT can learn from the experience and skills of Tasmanian independent Senator Brian Harradine a decade ago; to protect our children and their jobs what is needed is an independent or Green Senator in the ACT who would be prepared to use the balance of power to protect the ACT. This appears to be the only thing likely to make a difference.

Nathan Schmidt - November 27, 2020
0
When covid restrictions threatened the future of the annual Canberra and Region Motorcyclists Toy Run, the organiser of the event had to find a way to keep it going.