THE three major Centenary sports events staged so far in the Centenary year – the women’s golf, the one-day cricket, and the rugby league test – have shown that Canberrans will turn out on mass. 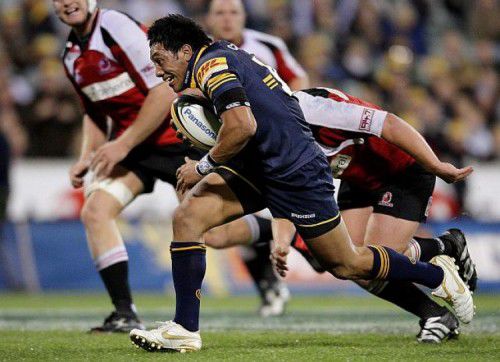 The women golfers were incredibly accessible and more than willing to promote the event and their sport.

Every player approached gave of their time and there were no player managers running interference. In fact, this is the same for the majority of sportswomen who don’t appear to be burdened by ego, many of whom have nine-to-five jobs and kids as well as a sporting career.

They realise the media plays a significant role in promoting their sport. It is not always that way with sportsmen.

The Australian Rugby League players couldn’t have done more to promote the Anzac Test with mass-interview sessions and a signing session which saw thousands turn out at Commonwealth Park. This not only promoted the test but the code itself in a region that has developed into a highly competitive market, particularly with the introduction of GWS.

The Raiders have lifted their game this season with as many as nine players and coach Dave Furner available through the week in the lead up to a game.

This is the result of a directive from the NRL to allow more access to the media. Many would see this as a direct response to the threat posed by the AFL.

The AFL has a 100-strong media department in Melbourne that effectively runs a news service. In my role, I can testify how proactive they are in this region in engaging the media.

I think the Brumbies and rugby union need to do more. Back in the days when the side was riding high with crowds in excess of 20,000, there were no media restrictions. If you went to training you were able to speak with whomever you wanted on a daily basis. As such, the profile of the players and the team was at an all-time high.

The current Brumbies’ side deserve to be playing in front of crowds in excess of 20,000 at Canberra Stadium. They play with a team spirit reminiscent of the golden days, but player access is limited and, as a result, the profile of the team and the players is not high.

Some supporters have told me they don’t know when the games are on because of the lack of media coverage.

It’s a “no brainer”: improve access to players, you’ll get big crowds to watch the team play at Canberra Stadium.

In North America, a market congested with major sport, on game days, all NBA players and coaches are available at the pre-game shoot around. Then 45 minutes before the game, the dressing rooms are opened to allow media access to all players and coaches. The dressing room is open to the media after the game with players prohibited from leaving until they have completed their media obligations.

In the NFL, teams open their dressing rooms to media access of all players and coaches on Monday, Wednesday, Thursday and Friday with a Sunday game. Coaches must be available after each training session as well.

It’s fair to say, in Australia – and Canberra in particular – we have a long way to go.

CityNews - September 20, 2020
0
AS they did in Tuggeranong last weekend, the Canberra Liberals have today (September 20) announced plans to build a new, $12.7 million indoor multipurpose sports complex if they win the ACT election next month.