MORE than 250,000 people braved the heat to attend this year’s Multicultural Festival, according to organisers. 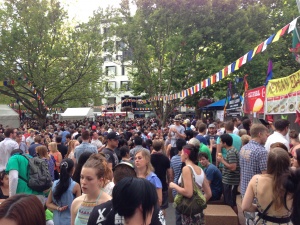 Minister for Arts Joy Burch said this year’s festival had been a “success.”

“Every year, the National Multicultural Festival brings together different cultures on a truly grand scale and this year was no exception,” Ms Burch said.

“It’s an affirmation of how much our city values and respects people from all backgrounds and loves coming together for a party.”

The three-day Festival ended yesterday and featured some 380 stalls with food, culture and history from approximately 80 different cultures as well as Aboriginal and Torres Strait Islander culture.

With temperatures reaching a scorching 37 degrees, organisers say over 23,000 bottles of water were handed out and 4,000 chairs located across the footprint.

Police  say the crowd was generally “well behaved”, but did respond to three assaults, one report of an act of indecency and took seven intoxicated adults into protective custody.

Paul Costigan - April 1, 2020
0
"When venturing out was possible, it was to confront the reality of large groups of men who believe they could dominate community spaces in packs and behave in an intimidating and aggressive way towards women or anyone who challenges their behaviour," writes "Canberra Matters" columnist PAUL COSTIGAN.