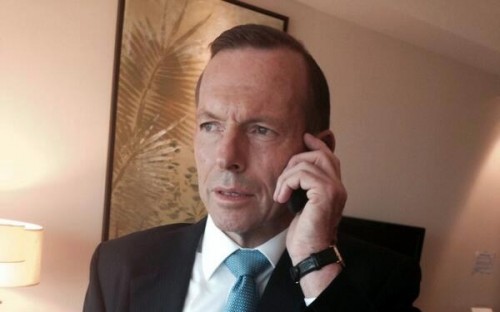 PRIME Minister Tony Abbott today struggled to reconcile a mooted “deficit reduction levy” with his promise not to raise taxes, while also fending off attacks from within the Coalition on his expensive parental leave plan.

Abbott said no final decision had been made on the levy but clearly indicated it was a prospect. Before the election he said the Coalition was “absolutely committed” to avoiding extra taxes on individuals.

But today he redefined his position, saying a “permanent” increase in tax would be inconsistent with his promise.

He stressed the need to get the budget under control and said there would be “lots of argument about all sorts of things in the budget”.

“But I am determined to try to ensure, as far as I humanly can, that we keep faith with the commitments that we made to the Australian people during the election,” he said on Melbourne radio.

“One of those commitments was to be a government of lower, simpler, fairer taxes … We want taxes going down, not going up. But when you’re in a difficult position, sometimes there needs to be some short term pain for permanent and lasting gain.”

Abbott continued to stand by his paid parental leave scheme, which would give high-earning women up to $75,000 for six months, as Coalition backbench critics took to the media to air their discontents, in the hope of putting pressure on him.

In face of an attack from Nationals senator John Williams, Abbott said he had been “an internal dissident on this issue”.

But the Coalition, including Williams, had been to two elections on the scheme, Abbott said, again providing a strong defence of the plan.

Opposition leader Bill Shorten said Labor would “fight a tax increase on ordinary Australians absolutely. It’s a bad idea, it’s a broken promise, it’s a tax increase. Labor will have nothing to do with it”.

He said the government was justifying tax increases on ordinary Australians by saying there was a budget emergency.

“How can there be a budget emergency if the Abbott government is going to provide millionaires with $75,000 each for paid parental leave?”

Williams said the PPL scheme was not affordable at this time. “This is a scheme I think that has to be put on ice or delayed until the economy is stronger.”

Abbott has been counting on Greens’ support to get the PPL through, albeit in a less generous from. The Greens will discuss their position in coming weeks. They have previously said they will support a more modest version of the scheme – some Greens sources said today it would have to be much more modest.

Greens leader Christine Milne said the Greens have “had no contact whatsoever with Tony Abbott on paid parental leave”.

“It makes you wonder whether he is serious about it and it is quite obvious now that he has a mutiny on his hands in his own party.”