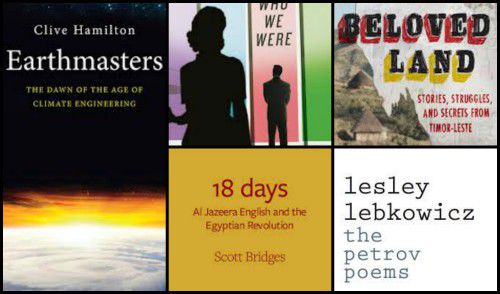 JOY Burch says five books, ranging from a non-fiction exploration of the Al Jazeera English news network to a verse novel covering the Petrov defection, have been shortlisted for the 2014 ACT Book of the Year Award.

“We had a record field of 48 nominations across a range of genres this year and the selection panel had a tough job narrowing the field down to just five,” Joy said.

“This highlights the depth of local writing talent and I would like to congratulate all our authors whose works were considered for this shortlist.”

“We had a spirited debate earlier this year over whether regional NSW writers should be eligible for the ACT Book of the Year Award, and that sparked a closer look at how we could use this award to better promote excellence and reward writers,” Ms Burch said.

“I’m pleased to announce that in addition to the ACT Book of the Year Award, our shortlisted writers will also be eligible for the first ever People’s Choice Award, based on the Libraries ACT Cool Awards voting system.

“This will be an interesting exercise to see how the readers of Canberra and the region agree or differ from the judging panel as we celebrate and promote reading Australian books.

“I would encourage everyone to pick up the shortlisted works, either from their local bookshop or Libraries ACT, and read them over the summer holidays.

“You’ll be able to vote on a dedicated page on the artsACT website, and the People’s Choice winner will be announced along with the judges’ choice early next year.

“While there is no cash prize for the People’s Choice winner, this is a great way to promote all the authors’ books and build interest in local writers.”

Previous ACT Book of the Year Award winners include Frank Bongiorno’s “The Sex Lives of Australians: A History”, Tony Kevin’s “Walking the Camino: A Modern Pilgrimage to Santiago” and Marion Halligan’s “The Point”.

For further information on the ACT Book of the Year Award visit www.arts.act.gov.au and for the full list of previous Award winners visit ACT Libraries website at www.library.act.gov.au.

The Award winners will be announced in early 2015.

CityNews - May 20, 2020
0
"IT is clear that as a community we failed Jonathon Hogan at every stage of his short and tragic life," writes JON STANHOPE as he shares the sad story of the demise of another young Aboriginal man the system failed to save.