PROTESTERS delivered a petition containing over 1.8 million names to Parliament House yesterday morning, asking the Australian Government to make details of the Trans-Pacific Partnership available to the public. 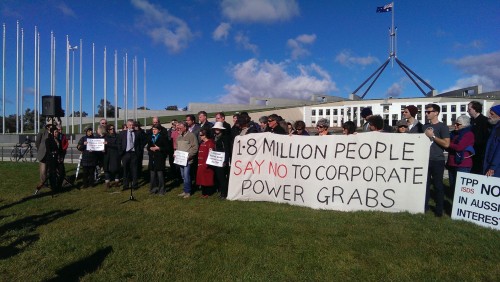 The TPP is a free trade agreement in the final stages of negotiation between 12 countries around the Pacific Ocean, Australia, Brunei, Chile, Canada, Japan, Malaysia, Mexico, New Zealand, Peru, Singapore, the US and Vietnam.

“Even the Australian Senate has been locked out of the negotiations and has been denied access to the wording of the agreement,” Mr Moore said last December. “It appears the agreement will simply be a ‘fait accompli’ despite its ability to over-ride Australia’s capacity to make laws to protect its own interests.”

CityNews - October 27, 2020
0
Letter writer MURRAY MAY, of Cook, says the return of the Barr government suggests there is a good proportion of people in Canberra cashed up and untroubled by rising rates and taxes.