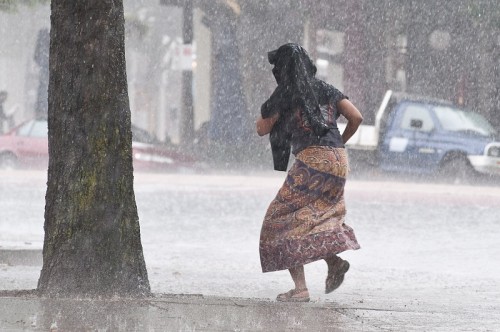 FOR the second day in a row the bureau has issued a storm warning (although the radar is clear for now):

SEVERE THUNDERSTORM WARNING
for LARGE HAILSTONES, HEAVY RAINFALL and DAMAGING WIND
For people in the Mid North Coast, Hunter, Central Tablelands, Southern Tablelands, North West Slopes and Plains, Central West Slopes and Plains, South West Slopes, Upper Western, Australian Capital Territory, Northern Tablelands and parts of the Northern Rivers, Illawarra, Riverina, Lower Western and Snowy Mountains Forecast Districts.
Issued at 12:03 pm Thursday, 4 December 2014.
Severe thunderstorms are likely to produce large hailstones, heavy rainfall that may lead to flash flooding and damaging winds in the warning area over the next several hours. Locations which may be affected include Armidale, Orange, Canberra, Goulburn, Tamworth, Moree, Dubbo, Wagga Wagga, Tibooburra, Cobar, Bourke and Lightning Ridge.
The State Emergency Service advises that people should:
* Move your car under cover or away from trees.
* Secure or put away loose items around your house, yard and balcony.
* Keep clear of fallen power lines.
* Keep clear of creeks and storm drains.
* Don’t walk, ride your bike or drive through flood water.
* If you are trapped by flash flooding, seek refuge in the highest available place and ring 000 if you need rescue.
* Unplug computers and appliances.
* Avoid using the phone during the storm.
* Stay indoors away from windows, and keep children and pets indoors as well.
* For emergency help in floods and storms, ring the SES (NSW and ACT) on 132 500.
The next warning is due to be issued by 3:05 pm.
If severe thunderstorms develop in Sydney Newcastle Wollongong or surrounding areas or Canberra and Queanbeyan, a more detailed Severe Thunderstorm Warning will be issued to people in these areas.
Warnings are also available through TV and Radio broadcasts, the Bureau’s website at www.bom.gov.au or call 1300 659 218. The Bureau and State Emergency Service would appreciate warnings being broadcast regularly.

As with yesterday feel free to send in any interesting pictures you get of events to john@citynews.com.au .

UPDATE: The ESA is warning that Belconnen and Gungahlin are about to cop it:

The Bureau of Meteorology has issued a Severe Thunderstorm Warning for the northern parts of the ACT with damaging winds, heavy rainfall and the potential for large hail tonight.

The ACT State Emergency Service (ACTSES) has units ready to respond to assist the Canberra Community.

The community is urged to stay well clear of flooded drains and other waterways. Motorists are also advised to take care and drive to the conditions.

Residents can call the ACT SES on 132 500 for storm or flood assistance. 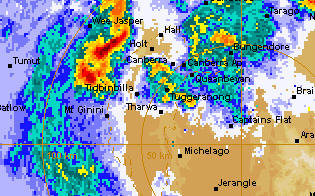