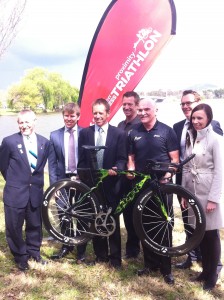 In 1776 father of modern economics Adam Smith noted in “The Wealth of Nations” that:

“People of the same trade seldom meet together, even for merriment and diversion, but the conversation ends in a conspiracy against the public, or in some contrivance to raise prices.”

One wonders what the great man would have made of Shane Rattenbury’s launch today of a triathlon for business and government figures.

Shane has launched the 2014 Canberra Government and Business Triathlon, to be held on Saturday 29 November, starting from the Acton Ferry Terminal.

“It is great to see the Canberra Government and Business Triathlon back on the race calendar for 2014,” Shane said.

“With two race formats on the day, the event caters for novices through to experienced triathletes and is sure to be an exciting event.

“Of course, the race isn’t just about fun and fitness, it’s about networking and building relationships between the public and private sector. I remember when networking took place on the golf course; we’ve stepped it up a notch and are taking it to the track.

“As a keen triathlete, I am certainly planning to take on the challenge and will be encouraging my colleagues in the Legislative Assembly to participate, whether it be in a team or individually.

“Events such as this are important as they not only encourage relationship building, but also promote healthy competition, fitness and good health,” concluded Mr Rattenbury.

Shane says there will be links to registration for the event at http://www.triathlon.org.au.