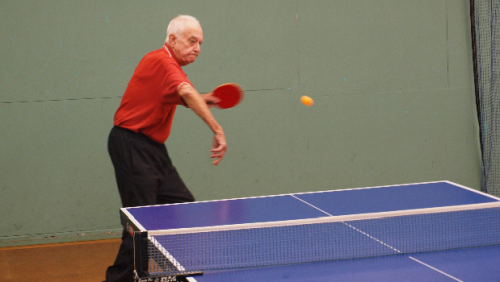 THIS is determined Arthur Wilks, 81, on the comeback trail from multiple episodes of surgery including a snapped achilles tendon, who will represent the ACT in the Australian veterans table tennis championships in Tasmania, next month.

Octogenarian Arthur, a retired school principal who last year published a history of ACT table tennis, will be joined in Tasmania by Noel Hart, 80, and Vic Bannon, 80, in an ACT team of more than 20 players, competing in age ranges from 40 to the over 80s.

Regular competitions are held at the seven-day Table Tennis Centre in Kingston, next to Eastlakes Football Sports Oval.

Shane’s sale, in aid of Karinya House, will feature stalls hosted by members of the Legislative Assembly and he has donated a push mower, a pogo stick and a briefcase. A pogo stick?

Free registrations for the national Garage Sale Trail to  garagesaletrail.com.au

MINISTER and motor car afficionado Mick Gentleman found himself in a form of automobile heaven opening a car dealership in Fyshwick the other day. Disarmingly declaring that “Canberra is certainly experiencing some economic uncertainty at present,” he urged the city’s suits to find the confidence and follow the lead of the car dealer whose investment gave him to believe that “the medium to long-term future is bright”. That economics were so simple.

CAN anyone remember the ACT government’s “Measuring Our Progress” website (measuringourprogress.act.gov.au)? No? Neither, it seems, can the government.

It says it’s the “ACT government’s online report card on life in Canberra.

It measures our progress towards an ACT that is healthier, fairer and safer, smarter, more prosperous, vibrant, sustainable, and with high quality services.”

And it appears not to have been updated since December 6, 2012.

EVERY Sunday until October 5, Parliament House is opening up its private courtyards for a two-hour “Meet the Gardener Tour” offering “tips that you can use to beautify your own garden!” Led by “an experienced member” of its landscape services team, it’s not cheap at $92 – and don’t bring the kids, the concession price is $82.

THE  Minister for Children and Young People, Mick Gentleman, sent out a single-paragraph media alert the other day that carried this odd message: “Only attribute first quote to Ms Burch, no need to attribute every quote if only Minister is quoted.” No one was quoted and what it’s got to do with Minister Joy Burch is anyone’s guess.

WHO pops up as a “like” on ACT Labor’s Facebook page? Why, ACT Sex Party election team leader and first officer Steven Bailey.

LAST-minute Christmas shoppers might take some comfort in knowing former PM Julia Gillard will be at Dymocks Canberra Centre store signing copies of her new book at 11am, December 23.

RATHER cryptic tweet from the Business Council inviting people to the Business Point Awards night at the National Portrait gallery on September 25.

OPTUS sends letter to long-term customer with automatic credit card bill payment saying: “It looks like your mobile bill payment of $0.00 was dishonoured” and threatening that the account will be suspended if he doesn’t pay!