HOW creepy is this? The ANU has the fourth highest number of Australian students (165) signing up last year to a nauseating US website designed to relieve “college debt” by dating cashed-up sugar daddies.

We were beaten to the title of “Fastest Growing Sugar Baby School” by the University of Sydney with 207 students joining in 2013.

The organisers say one million students worldwide have logged on to SeekingArrangement.com in search of wealthy benefactors, with the average college “sugar baby” receiving $3000 a month.

And how sugar babies separate sugar daddies from their dosh, we’ll leave to your imagination.

IF the Chinese horoscope is taking a toll on your ego and the prospect of being classified publicly as a pig, goat, rat or snake is holding you back, fear not.

The inscrutable Chinese Precinct General Chamber of Commerce has dreamed up the first Australian Chinese Zodiac (a bridge builder between Chinese and Australian communities).

“These were done by cultural and feng shui experts, and the results are quite interesting.”

Indeed, rats have become kangaroos, goats to koalas, snakes to goannas and pigs to echidnas.

ROBYN? Robyn? Rob-yn! Ah, looks like we missed her. The Centenary’s artistic director Robyn Archer got all the flags and paraphernalia in before she left, but seems to have missed the bloody great painted wall at the side of the Canberra 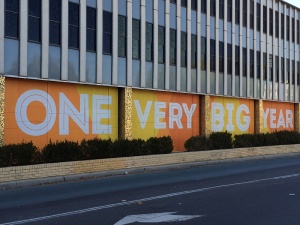 Museum and Gallery, unless it is destined to be a museum piece.

SPEAKING of the Centenary, CC received a passport from the “honorary consul-general for Tasmania” that, when entering the Apple Isle, allows the bearer access to the “world’s cleanest air” and to “enjoy the world’s most civilised licensing hours”.

Turns out it’s an old promotional idea and the late Federal MP Michael Hodgman (“The Mouth from the South”) handed them out to officials he met when travelling overseas.

EX-MIDWIFE Rodanthe Lipsett, 92, of Reid, holds an honorary doctorate from UC, is honoured with an Order of Australia Medal and has written a book, “Baby Care”, which offers advice for managing the early months of a new baby that is in its third edition.

She dedicates most of the royalties to a national trust fund set up in her honour to provide support for Aboriginal midwives and works tirelessly to get the book into libraries, maternity homes and, especially, into the hands of teenage mums.

Despite her age, she walks to town (“if you don’t use it, you lose it”) and gently persuades businesses to buy a book and inscribe it personally for young mums. The suits recognise her devotion and cheerfully find the $35.

At the end of last year she went to Queanbeyan and popped into shops to warm support, until she got to a real estate agency, where the besuited female manager sent the nonagenarian packing with the flourish that they had a firm policy of having nothing to do with “hawkers”.

She told CC she chuckled at never having been called a “hawker” before. Unfortunately, she has forgotten the name of the firm, which saved them from our exposing the miserable tightwads.

AN email over the weekend from the Emergency Services Agency carried the subject line: “iSmoke in Apple store”.

THE “ActewAGL Royal Canberra Show” is upon us, but CC’s Weston snout reports there is a view that, according to “Royal protocol”, a commercial name cannot precede the name “Royal” and that it should be the “Royal ActewAGL Canberra Show”. Can anyone confirm this?

WHILE CC usually loathes graffiti, we made an exception for this prophetic Pink Floyd daubing at the abandoned Higgins Primary School from our upper-north shore snout. 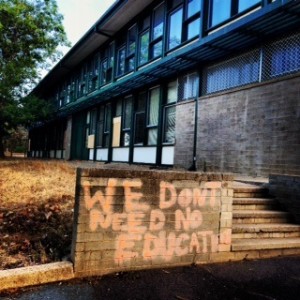 “EXCITED and blessed”, Canberra’s singing plumber Vince Gelonese gushes that his single “Every Dream” has climbed to the top of the US “Billboard” Hot Single Sales chart. We love that Vince is “overwhelmed”, but CC just can’t get a handle on how big a deal this chart really is.

POLITICIANS of all persuasions are never slow coming forward to promote themselves, but Opposition Leader Jeremy Hanson’s January “eNewsletter” to the party faithful has broken new ground for local pollies – astonishingly, it contains no photographs of himself, apart from one in the masthead.

CityNews - June 2, 2020
0
There are two kinds of people in Canberra; those who work and pay taxes and those who don’t, says letter writer LUCINDA SPIER, of Campbell.