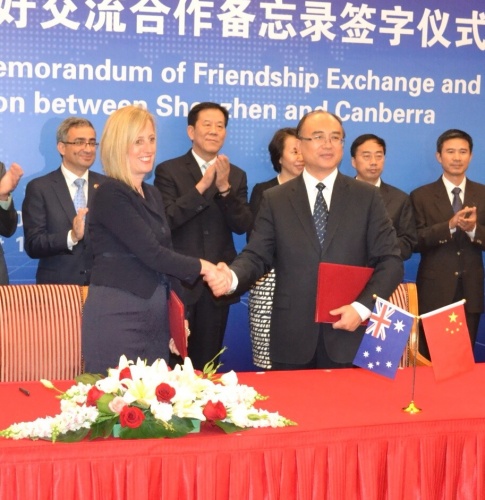 CHIEF Minister Katy Gallagher at 3am this morning announced the signing of a Memorandum of Understanding with the sprawling industrial metropolis of Shenzhen.

The MoU was signed with the Mayor of Shenzhen Mr X? Qín, in China. Katy says it marks a new era of collaboration between the two cities.

“This memorandum of understanding opens the door to a range of significant new opportunities for Canberra businesses with a city which plays home to some of the largest technology companies in the world,” the Chief Minister said.

“There are many similarities between the cities of Canberra and Shenzhen but in the first instance areas like innovation, high technology, education and environmental protection have been nominated as the priority areas to focus on,” Katy said.

“We know a number of Canberra based innovative ICT businesses are pioneering digital and other high tech projects which are grabbing attention internationally and I hope that this economic cooperation deal will help them and others to build and promote their businesses and help them to establish in such a significant overseas market.

“The agreement will diversify Canberra’s economy by prioritising business investment, strengthening the education sector and building Canberra’s vision as a digital city.

“The MOU highlights two-way investment and cooperation between the companies and institutions of Canberra and Shenzhen, on areas of shared interest including technology, innovation and industry.

“The MOU will reinforce the importance and growth of the ACT’s exporting community, and I hope that it will have significant benefits for the local economy,” the Chief Minister said.

The Chief Minister also participated in a roundtable discussion with key business leaders in Shenzhen where she was able to showcase investment opportunities in Canberra.

“I had the opportunity to promote Canberra to investors by providing information on a number of our biggest and most exciting projects, such as City to the Lake and Capital Metro, which are priority infrastructure projects for Canberra,” the Chief Minister said.

“My message to Shenzhen businesses is that Canberra is open for business and ready for international investment and partnerships,” the Chief Minister concluded. 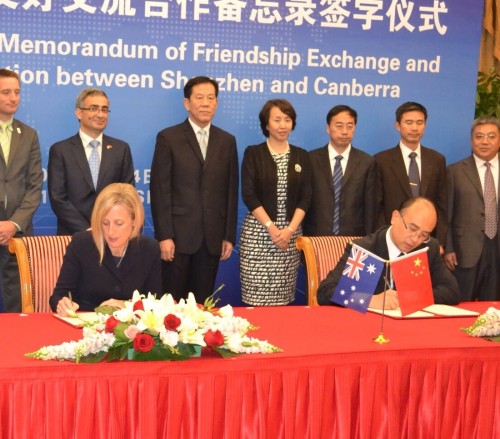