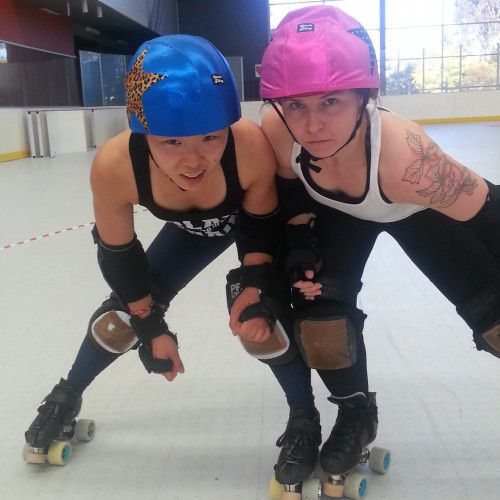 TEAM Australia is on its way to the Roller Derby World Cup in Dallas, Texas from December 4 – 7 2014.

There are 34 participating countries this year – including Australia, Brazil, Japan, South Africa and of course the USA where the sport was revived in 2003. In 2011, 13 countries fought it out for the cup with Australia placing 4th after the USA in top position, Canada and the UK. Due to Australia’s 4th place position in 2011 they have been seeded at the top of their pool, which sees them face Italy, Belgium and Greece in the first round of 40 minute qualifying games. A full schedule is available at rollerderbyworldcup.com.

A squad of 20 will make the trip to Dallas along with 2 bench coaches (Victoria and Queensland) and a team manager (ACT). The squad is a collaboration of the Australia’s most experienced and elite players currently in the sport and competitively selected.

Shannon “Shaggle Frock” Dillon was also shortlisted as one of the 28 skaters of the training squad.

If you can’t get a flight to Dallas, you can see all of the action online at rollerderbyworldcup.com and an all access viewing pass will cost you $45.00. Team Australia is self funded and skaters pay their own way to Dallas, if you want to contribute and help these skaters represent their country you can make a donation at http://www.gofundme.com/7qjyf4.

Ian Meikle - September 14, 2020
0
It's a bit sad that our covid-affected election has come down to thousands of roadside signs to help candidates with the challenge of recognition. It's a corflute-inspired "Seven Days" with IAN MEIKLE.

More walk-in centres, but do they ‘hide’ hospital problems?