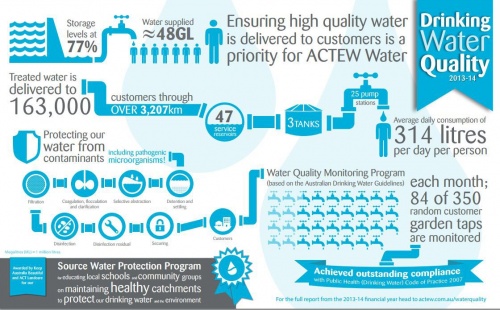 ACTEW’s Drinking Water Quality Report 2014 has been released and they say they are delivering some of the highest quality drinking water in Australia.

Highlights of the report include:

David Hohnke of ACTEW Water said that this year the organisation had taken and tested more than 5,000 routine water samples from garden taps and reservoirs.

“And we are always looking for more residents willing to participate in our program and allow samples to be taken from their taps,” he said.

“Our customer base continues to grow across the ACT and beyond – as well as serving Canberra’s growing population of 380,000 people, around 40,000 Queanbeyan residents also access our water. This number will only continue to grow as new suburbs are built.”