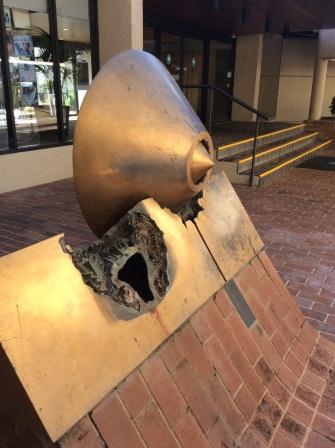 A sculpture stolen from the CSIRO forecourt on Limestone Avenue, Campbell, was recovered by police yesterday (Wednesday, October 29).

Between 9 pm Thursday October 16, and 3pm Friday October 17, the sculpture titled Il grande ascolto (‘the great listening’), was damaged and half of it stolen.

The original sculpture consists of two large bronze discs, approximately 80cm in diameter each, mounted beside each other on a bronze base, and facing opposite directions. The sculpture had been in-situ since 1970.

Yesterday police received a telephone call from a business in Fyshwick, stating the sculpture had been left outside their premises.

Members from City Patrol attended and conveyed the sculpture back to City Police Station.

AFP Forensic Services attended and conducted an examination of the sculpture for possible evidence.

Belinda Strahorn - October 15, 2020
0
After the end of the school holidays, and with 11 confirmed COVID-19 cases recorded in NSW in the past 24 hours, ACT chief health is urging Canberrans to remain vigilant and get tested if they feel unwell.