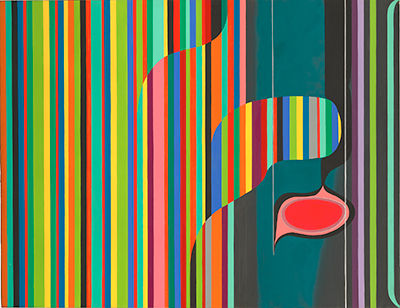 THE National Gallery of Australia says senior artist Dale Frank – one of Australia’s most significant contemporary painters – has donated a major gift of works valued at $4 million, including paintings, drawings and multi-media collages.

“Dale Frank’s generous donation to the Gallery is the most significant gift by a living artist since the Arthur Boyd Gift in 1975,” said Gallery Director Ron Radford.

“It presents a remarkable opportunity to represent diverse aspects of the artist’s oeuvre with highly significant examples from each period of his output. Included in the Gift is an outstanding, greatly sought after group of recent paintings, some of which were exhibited at the Sydney Biennale in 2010. There are also many other remarkably important, less well-known works that reveal Frank’s capacities across a range of media. Frank is an artist of national and international significance and we are very grateful that he chose to make such a significant gift to the national collection”, he said.

Dale Frank’s prodigious talent was apparent from an early stage in his career. His talent was widely recognised following his solo exhibition in Adelaide’s Experimental Art Foundation in 1979. Among his many exhibitions Panorama della Post-Critica at Museo Palazzo Lanfranchi, Italy, in 1983 saw Frank’s paintings shown alongside those of Anselm Kiefer and Thomas Lawson in an influential three-artist exhibition. He was also invited to exhibit in Aperto in the Venice Biennale of 1984 and his work was included in the 20th century survey exhibition and seminal publication, Europe-America: 1940 to the present, Museum Ludwig in Cologne, Germany in 1986. Frank’s work also featured in Personal Structures, Palazzo Bembo, as part of the official program of the 55th Venice Biennale in 2013 and has been included in three Sydney Biennales (1982, 1990 and 2010) and the recent Adelaide Biennale 2014.

“I have long held the belief that at an appropriate time in an artist’s career, in an artists’ life, the ‘Gifting’ of a body of the artists’ work to the public is incumbent, is vital for sustaining cultural life,” said Dale Frank.

“The group of works in this Gift covers a period of 32 years, from massive drawings seen only in Italy and New York between 1980 and 1982, to the paintings produced for the 2010 Sydney Biennale. The group of works were selected through curatorial discussions between all involved to ensure a comprehensive overview of the practice. It is a Gift to the National Gallery of Australia. Personally for me, there was never any consideration of any other Institution, not because of the other Institutions, but because over the time of my career, there has always been, on occasions the right word of encouragement, an overly intelligent joke quietly shared, humility, and the occasional support through a rare purchase when the funds allowed. With James Mollison, Betty Churcher or Ron Radford, we have only spoken a few times, but I always felt my work, my practice, was being discussed with respect. The outcome of any conversation was never ‘a sale’; rather the outcome was a belief that there was passion for Art, for contemporary Art. I would like to thank Anna Schwartz for supporting me in this Gift, and to Ron Radford, and Deborah Hart and the staff for their seemingly endless days of research and effort to achieve this”, he said.

“A performative dimension has been a significant aspect of Frank’s art from the late 1970s through to the present,” said Deborah Hart, Senior Curator, Australian Painting and Sculpture post-1920.

“He is also a truly great colourist with a keen sense of the tactile, inherent qualities of materials, reflected in many remarkable works gifted to the National Gallery. His colour ranges from acid greens and velvet blacks of earlier works, to vibrant post-Pop imagery, to veils of precise colour in his monochromes and more recent luscious “poured” paintings. These works reflect Frank’s ever-deepening awareness of the ways in which time, flow and inter-relationships have occurred in the application of paint itself. They are evocative paintings, like “landscapes of mind”.”

Also included in Frank’s generous gift is a group of outstanding surreal drawings that reveal a strong sense of an inner life. Collage is another important aspect of his art, from early examples on paper through to highly experimental later works in which he incorporated a wide range of materials and objects into the surfaces of his works. The great care he invests in works of the past decade contradicts the impression of effortless accomplishment.

Sponsored Content - November 25, 2020
0
It’s time to see the ability in disability, is the core message of this year's annual International Day of People with Disability (IDPwD) on December 3. This is a sponsored post.