IT’S not always easy being an artist, as Elizabeth Cameron Dalman, often dubbed “the mother of contemporary dance in Australia”, can tell you. 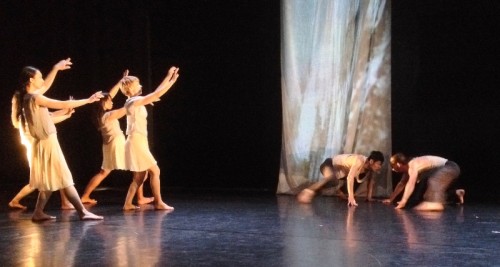 “Mirror Image – reflections on people and land”  is a new contemporary dance theatre work by Dalman’s Mirramu Dance Company, in an ambitious collaboration with Dancecology (from Taiwan) and Jyh Shyong Wong of DPAC  Dance company (from Malaysia), but it’s being staged this weekend without a cent of public funding from artsACT, a source of some disappointment to the performers and their director, whose unflagging original dance work in Canberra has been widely acknowledged.

In fact, as Dalman told “CityNews” this morning, she had partly funded the enterprise by asking people at a recent significant birthday not to give her a present but to the back the production instead. And they did, although Dalman has supported it by accommodating and feeding this dedicated group of dancers at her property Mirramu on Lake George.

“Mirror Image” is a result of a cultural exchange amongst the three companies both here and in Tawian over a period of a year. It explores the relationship between people and land and the reflection of that in our landscape. The importance to human beings of natural places and the notion of landscapes of the heart are also in Dalman’s view.

Dalman and the dancers plan to tour the production to Malaysia and Taiwan later in the year, no easy feat, given the lack of funding and yet they have already secured venues. There can be no doubt that the show will go on.

“Mirror Image – reflections on people and land”  at ANU Arts Centre,  April 4,5 and 6. Bookings  to canberrarep.org.au. Dinner-show packages with Teatro Vivaldi bookings to 6257 2718.