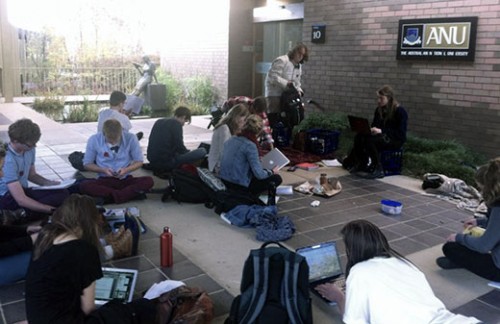 Louis Klee sits on a milk crate – a surprisingly everpresent symbol of Australian youth – reading Judith Butler’s new book, Disposession: The Performative in the Political. He’s surrounded by other readers, mostly students, by stacks of books; at his feet is a big cardboard tray full of muffins donated by a sympathetic catering company. We’re all sitting outside the front doors of the Australian National University Chancelry, a building reminiscent of a crenellated castle, with more exits and entrances than a rabbit warren. Since an eight-day occupation in 1994, the front doors have been fortified, and a pair of bored-looking security guards eyes us from a booth inside. Soon, however, the guards won’t even need to bother. The sound of a drill bounces through the forecourt as a worker makes adjustments to a brand new security camera behind Louis’s head. Another one sits above the pond next to our small reading party. A space for a third, across from the first, has already been marked out. Someone wonders if, gazing wistfully at each other across this concrete-and-tile space, the two will fall in love.

The read-in was orchestrated by Louis as a pacifist manifestation of student discontent at tertiary funding cuts and deregulation proposed by the Abbott government. He puts it simply: “I wanted to make the simple act of reading something subversive”. It is a protest which makes it harder for VC Ian Young – who has been talking loftily of international competitiveness and standards of equity – to forget that the ANU also harbors a student population mostly desiring three things: to learn, to live in a diverse and creative environment, to not struggle for decades under student debt.

VC Young may also not be relishing that this protest has united both radicals and politically unengaged students in endless, fruitful, fascinating discussions of the ins and outs of the proposed deregulation. In between conversations about Louis’ growing fame, to which he reacts with awkward amusement, the disappearance of Deregulation Duck – the brave plastic ex-denizen of the Chancelry pond – and the location of the nearest toilets, the fifty-or-so students who have visited the Chancelry forecourt have talked a great deal of political jive. The discussion is friendly, patient, and can be always backed up by one of the dozens of books lying by our feet. The only time it has stopped, in fact, was during the lunchtime visits of Ian Young and Chancellor Gareth Evans.

The first of these visits was seen as a positive step towards student-administration dialogue. By their third and fourth visits, the shine had worn off. The readers’ questions became more succinct, more pointed – do you support an increase in funding for future students? How do you reconcile a move towards a more elite institution with the importance of a diverse student culture? Why do you defend the American model when it has serious equity problems? Each question was expertly dodged and avoided. After the men left, none of us could make sense of a single answer they had given, nor remember the wording. They talked pure spin. And every time, their PAs would hover behind them, taking more notes than us, snapping photos. Sure enough, on Thursday Young used the mass email system to announce that he had “engaged in lots of conversations with students around campus”. The administration were using our read-in for propaganda.

The next day, a group of forty students held a picket outside the Chancelry on the occasion of the meeting of the ANU Council, the university’s largely autonomous governing body. We were greeted by at least thirty armed police officers, a police camera unit, two riot vans, and a mobile HQ vehicle. The almost 1:1 ratio was a personal touch we could have done without. Not able to approach the main doors, we stood by the stairs, in the cold morning sunshine, listening to speeches, chanting, sharing jugs of coffee, laughing – though it was hardly funny – at the situation. After council ended, the councilors refused to send delegates out to meet and talk with the student body, and we likewise refused to send representatives up – we had heard enough spin in the preceding week. The sentiment was pointed: the university does not respect its student population. The VC will not meet with us on our terms, but will acquiesce to dropping in on a group of ten reading students for a photo-op: VC attentive, students concerned, CCTV camera in background.

Legitimacy is an important word in politics. Violence and anger de-legitimise social movements, in the eyes of those in power, and so the read-in was legitimate. Is the installation of three security cameras in a ten-meter-square forecourt legitimate? What about the use of thirty police officers to keep a seven-hour-long vigil over a small group of peaceful protesters? What of the proposed use of students as a cash cow – a cash cow that, with steadily rising interest, will by 2023 be making more money for the government than it spends on tertiary education, at the cost of debt some of us may never be able to pay off? Until the Budget, until I saw the contempt with which students were treated by the ANU, I had not attended a rally. Until Friday’s picket, I did not realise how out of touch politicians are with those they have a mandate to represent. Until the read-in, I did not know how to articulate my views. Knowledge is a powerful weapon, and university administrations would do well to remember that they are meant to be its propagators, not its wardens. If they won’t do their job, we will.

[This article by ANU student Raphael Kabo first appeared on his ThoughtSoup blog and is reproduced with his permission. Photo courtesy of Camilla Patini]

Paul Dorin - February 23, 2021
0
Getting squeamish? The vaccine needle's getting closer...