CANBERRANS love their trees so it is not surprising that quite a few are upset at plans to cut down some London plane trees along West Row and in nearby Hobart Place for the Canberra House redevelopment; now the property developer says the removal was required by the ACT Government, rather than simply being “authorised” by it, as signs on the trees state. 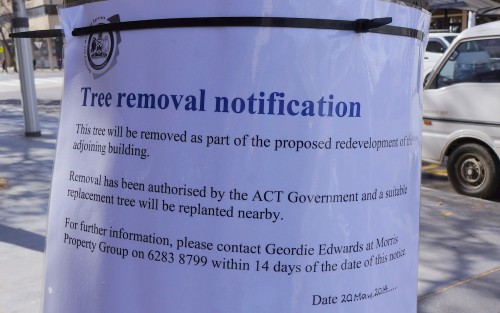 “The tree removal is a requirement of our Development Application,” said Geordie Edwards from the Morris Property Group, who is listed as a contact person on the signs. “Basically, TAMS require us to remove those trees and replace them with specimens that they will provide the specifications for.”

The office of Minister for Territory and Municipal Services Shane Rattenbury did not immediately verify this claim and was unable to provide a response before deadline.

A concerned member of the public, John Skelton, told “CityNews” yesterday that he contacted Mr Edwards and was simply told the trees were being removed because they “interfere with” the redevelopment. Mr Skelton said he also contacted Mr Rattenbury’s office to complain, and was told they would investigate the issue.

Officers of the ACT Planning and Land Authority were not authorised to respond to enquiries from “CityNews” yesterday, beyond saying there was considerable discussion about the trees in question, and referred us to a senior communications officer from the Environment and Sustainable Development Directorate, who contacted us by email before going out of the office half an hour later and referring our enquiry to another staff member.

Despite promising to get back to us this morning, the directorate is yet to respond. Under the initial assumption that the developer had asked to be allowed to cut down the trees on public land and “authorised” to do so, these were our questions:

On what basis was their removal authorised?

Presumably as the trees are on publicly owned land the developer had to apply for permission to remove them, stating the reasons they need to do so.What were those reasons?