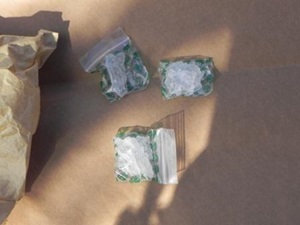 A 24-year-old Griffith man will appear before the ACT Magistrates Court after officers from Taskforce Nemesis executed multiple search warrants across the ACT last Friday (August 29).

About 9.30am, police executed a warrant at the man’s Griffith home. At the completion of the warrant, Taskforce Nemesis officers executed further warrants on a house in Phillip and Narrabundah and five vehicles at the locations.

During the execution of the search warrants, officers seized illicit substances, believed to be cannabis, steroids and methamphetamine.

Prescription drugs, a conducted energy weapon, ammunition and a large sum of cash were also seized.

“Taskforce Nemesis continues to apply pressure to those who are involved in organised crime including outlaw motor cycle gangs,” CPO Lammers said.

ACT Policing is urging anyone who may have information relating to criminal activity to contact Crime Stoppers on 1800 333 000, or via www.act.crimestoppers.com.au. Information can be provided anonymously.