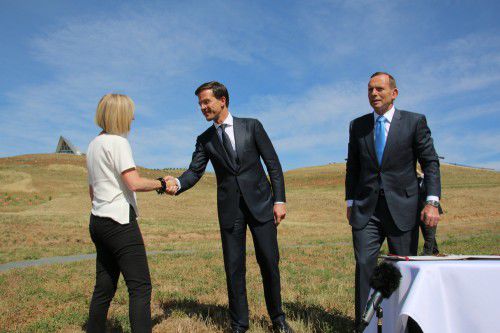 CHIEF Minister Katy Gallagher has joined the Prime Minister of the Kingdom of the Netherlands, Mark Rutte, and Tony Abbott to plant a Silver birch tree at the National Arboretum in recognition of the strengthened relationship between Australia and the Netherlands following the tragic events of MH17.

“The MH17 tragedy moved the ACT community greatly through the loss of Canberran, Liliane Derden, and I know the visit by His Excellency will be well-received by all those affected as a result of such an unspeakable event,” Katy said.

“The Silver birch is a species of tree that is well represented across the Netherlands in its beautiful woodlands, and I am pleased that we now have this tree to provide a quiet place of reflection for Canberrans and visitors alike.”

The National Arboretum is fast becoming a symbol of the many relationships Australia has with other countries. The Central Valley now hosts a number of trees planted by Heads of Government, Heads of State and royalty, including the most recent additions by the President of Singapore and the Queen Mother of Bhutan.