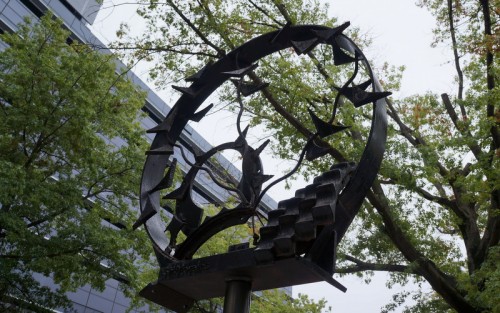 CANBERRA’s long love affair with talking about public art has had a new chapter added in Latin American Plaza with the launch last night (as covered in CityNews social pages) of Hugo Morales “The Encounter” by Chris Bourke.

A gift to the people of Canberra from the Government of Uruguay the piece has been constructed from steel left over in the building of the vast Palmar Dam over the mighty Rio Negro.

“This work of art created by Uruguayan artist Hugo Morales is significant to both Canberra and to Uruguay, given rivers and dams are the reference point for this piece,” Dr Bourke said.

“The site of Canberra as the national capital was dictated by the availability of water from the Cotter River, in this driest of continents. The damming of river and the hydro electric station was one of the earliest civil works to establish the city.

“The western edge of the city sits alongside the Murrumbidgee River part of the mighty Murray Darling River system, the third longest in the world.

“We are very proud to now have this sculpture in Canberra to tell a story of a different river system, the power of rivers, and the part rivers play in the lives of Uruguayans.”

One might note that in Uruguay the rivers’ importance stems from their vast size, where in the Canberra region the reverse holds true.

The Encounter is the fourth piece of art to grace Latin American plaza which, after a desolate start, is starting to be an interesting corner of the city. 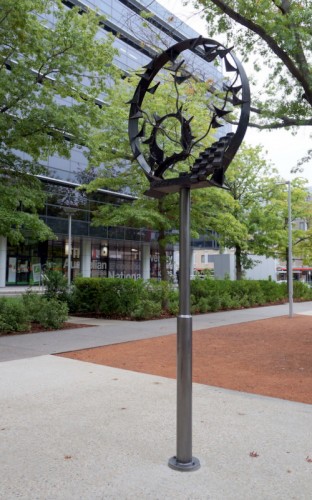 UPDATE: CityNews arts Editor Helen Musa was at the unveiling and has sent in the following report:

THE wet weather of Canberra lent itself to a happy event yesterday in Latin American Plaza, Civic, when the Uruguayan ambassador, Dr Ricardo Javier Varela, formally handed over our sculpture gifted to the people of Canberra and Australia.

The sculpture, “The Encounter,” 2006, by Uruguayan sculptor, Hugo Morales, commemorates the 2006 meeting of sculptors in Palmar, Uruguay’s Soriano Province. It is made entirely of discarded steel from the 1982 construction of the Palmar Dan and hydroelectricity scheme.

Chris Bourke, MLA, accepting the sculpture on behalf of the ACT Government described the gift as a different kind of encounter – “a wonderful gesture uniting the people of Uruguay, Canberra and Australia.” Dr Bourke commented that in more than one of the four sculptures now in the Latin American Plaza, water was a motif, the very first one from Mexico, for instance, representing the Goddess of Water. Noting that Canberra was placed at a confluence of rivers and water sources, he said that to most people water represented the universal source of life.

Canberra’s weather was also on the mind of Ambassador Varela, whowelcomed the rain, saying “we spent the whole summer suffering from the bushfires and drought.” He briefly sketched the elaborate diplomatic manoeuvrings that saw the gift coming from the province of Soriano to the capital of Australia via a nightmare of bureaucratic loopholes, but he assured those present that the people of Soriano, located right in the middle of Uruguay and the source of 70 per cent of the country’s crops, were happy to see their sculpture come to Australia, where approximately 20,000 former Uruguayans now happily reside.

Morales’ sculpture follows gifted works from the governments of Mexico, Cuba and Chile. In it, the 19 triangles represent the home provinces of all the sculptors who gathered in 2006, encircled by the ring that symbolises Uruguay. The gears, waves and steel cables expressed Uruguay’s generation and transmission of hydropower and sun is represented by the inner circle.

At the end of the handover ceremony, those Latin American ambassadors who had not yet handed over sculptures were busy contemplating what contribution they could make to the unique Latin American Plaza.

The Latin American Plaza is situated between Marcus Clarke and Childers Streets, adjacent to the Unilodge

CityNews - May 11, 2021
0
A COVID-19 compliance check at a Civic apartment last year has since led to the discovery of an illegal prostitution ring that is being run across three states, revealed Supt Scott Moller today (May 11).