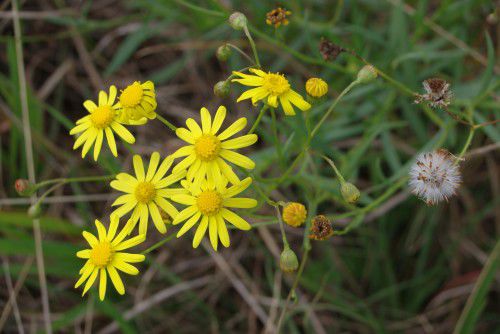 CANBERRANS are again being urged to report infestations of the pest plant Madagascan Fireweed (Senecio madagascariensis) after it was discovered in Coombs.

“Fireweed was discovered on Monday at several locations around a pond in Coombs,” Stephen Hughes, Biosecurity Manager, Territory and Municipal Services said.

“ACT Government weed management staff are undertaking a program to control the weed incursion as quickly as possible and remove the plants before they flower and their seeds spread. Our weeds team will be conducting further surveys to determine the extent of the infestation and will also conduct letterbox drops and erect signage in affected areas.

“Madagascan Fireweed is a small multi-stemmed daisy-like plant with bright yellow flowers often with 13 petals. It is often 10 to 60 centimetres tall. Like a daisy, the weed produces fluffy wind borne seeds. Plants can produce tens of thousands of seeds, making it highly invasive.

A major concern is the toxicity of Madagascan Fireweed to horses and grazing livestock as it can cause liver damage in these animals similar to the effects of in Paterson’s Curse.

“Madagascan Fireweed is considered one of the most damaging weeds to grazing land and the environment. It initially invades land along roadsides before spreading into neighbouring pastures and nature reserves. Locating and eradicating the weed quickly will save the ACT significant expenditure in future weed control and protect our native fauna and grazing lands.

“Due to its bright yellow flowers, Madagascan Fireweed is likely to be noticed by passing motorists. I urge residents to report Madagascan Fireweed and help us manage the infestation. Residents who remove this weed should wear gloves, as it can irritate the skin, and double bag the weed when disposing of it to ensure it is not spread further.

Madagascan Fireweed sightings can be emailed to fireweed@act.gov.au or reported to Canberra Connect on 13 22 81. Take note of the exact location of the sighting and include a photo of the plant for confirmation. For more information about weeds, visit the Weeds of National Significance website at www.weeds.org.au/WoNS/fireweed/

Helen Musa - May 11, 2021
0
With the recent announcement of a Royal Commission into veterans' suicide, the message of a play coming to the Courtyard Studio this week seems apposite.