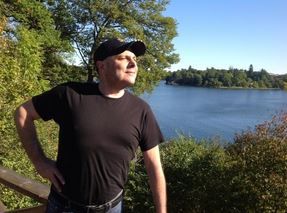 Some may remember him as: Franko Vincenzo Movizio ‘the inflatable sports reporter’ on the Doug Mulray show or ‘the reporter in the water with Wendy Harmer’s Morning Crew, or the madcap rev-head on Network Ten’s RPM program, during an illustrious career spanning 15-years in Australian radio and television.

Since moving to Europe more than a decade ago, Frank has gained quite a reputation for his offbeat sports commentaries. ‘The Voice Of Dutch Football’ is one tag he’s been labeled with since accepting the role of play-by-play commentator on the Dutch Eredivisie competition, broadcast weekly to more than 20 countries on networks such as ESPN, Setanta Sports and Al Jazeera. Frank also talks European Football and UEFA Champions League weekly on the ABC’s Grandstand Show, voices AJAX TV’s 60-minute international program and hosted the English Breakfast Radio Show on 99.4FM Amsterdam.

Frank is no stranger to the Nation’s Capital, having been part of 2CC’s line up in the early 80’s with his second tour of duty starting Monday November 3.

CityNews - February 26, 2021
0
Through deception, a Campbell woman, conducting fraudulent activity at a Weston child care facility, has allegedly obtained property worth more than $160,000.