WITH the fourth season of HBO’s Game of Thrones (GoT) upon us, many of us will once again escape to the mythical land of Westeros. And we’ll do so thanks to a vast array of international locations and visual effects, teams of ensemble cast, battle scenes with hundreds of extras, horses, stunts, fires, more than 500 crew, mythological creatures and lavish costumes.

All of this thanks to an estimated series production budget pushing a staggering US$250 million for the four seasons to date.

Television is no longer the poorer cousin of cinema. Digital screen production has rendered the difference between the two worlds almost meaningless and nowhere is this revolution more apparent than in the phenomenally successful GoT.

So how is this epic fantasy world created? 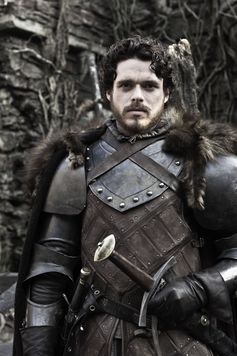 The majority of costumes and associated armour for GoT are made in-house, requiring a solid staple of artisans: metal workers and cutters to leather workers and dyers, printers and embroiderers. Speculation is rife about costumes supposedly being inspired by the 1990s stylings of British fashion designer Alexander McQueen – as famously worn by Icelandic singer Bjork – as well as by other fashion superstars such as Galliano, Haider Ackermann, Rick Owens and Yohji.

The superior craftsmanship of the set design, combined with the lighting and computer-generated imagery (CGI) creates interiors reminiscent of Italian Baroque paintings of Caravaggio. The art direction in certain scenes such as the ones pictured above and below contributes some of the best examples of chiaroscuro (the use of strong contrasts between light and dark) ever presented on screen.

Not long ago, such finely-tuned images were the domain of big-budget features. Having worked with CGI on a number of occasions including the creation of 3-D animal animation and digital sets, I am only too aware of the time-consuming and disciplined processes involved.

With animals, such as the direwolves or dragons in GoT, CGI involves references, biomechanics, walk cycles, wire frames and textures while digital locations require footage of real places combined with CGI enhancements.

Production teams then need to draw detailed storyboards, research landscapes and ancient worlds, scout for remote locations, shoot “background plates” and other elements such as dust or snow and use green screens to create layers of foreground and background – all the while recording meticulous notes for shot size, angle, lenses and direction of light, which are needed by animators to match and meld them into a cohesive whole.

This melding process is achieved through rendering and compositing, which combines various individual components and actions of a planned animation sequence to create a single image or shot. Extremely time-consuming, melding involves processing each pixel in the frame through digital manipulation.

CGI demands extraordinary effort not merely to create a shot, but to create magic – the illusion that these different elements are part of the same scene.

In the creation of The Wall depicted in the series – a colossal fortification made of ice which stretches for 300 miles along the northern border of the Seven Kingdoms, 700 feet high and 300 miles long – the production team has likely used a combination of real elements and digital effects.

In season three, when the characters attempt to climb The Wall, massive shards of ice collapse, safety ropes are cut, protagonists dangle over the precipice, while others fall to their horrible deaths.

If the usual CGI processes were applied here, background plates of real cliffs edited together with footage of actual rock climbing and stunts would have been integrated with green screen sequences using actors to create a cinematic scene in the true sense of the word – visually expansive, exciting and dramatically tense.

GoT is symbolic of the resurgence of the neo-mythological genre firmly established by Hollywood on the Tiber in the 1950s and 60s where films produced by Hollywood studios capitalised on US and Italian government subsidies, cheap labour and exotic Mediterranean settings. This is evident in the appropriation of the big-budget mentality of the flagging creative genius we still call Hollywood.

The series is bigger than many studio films, both in terms of production scale and production values. Cinematographic television has come of age here with state-of-the-art sound and vision combined with killer storylines where the abundance of sex and violence would make many Hollywood studio executives proud.

Like GoT’s noble houses fighting over the mythical land of Westeros, Hollywood faces what appears to be an unstoppable, if not supernatural, threat from its television counterparts.

One could be forgiven for thinking they’ve found screen entertainment’s Holy Grail.

Explainer: Game of Thrones, the story so far

Franco Di Chiera does not work for, consult to, own shares in or receive funding from any company or organisation that would benefit from this article, and has no relevant affiliations.