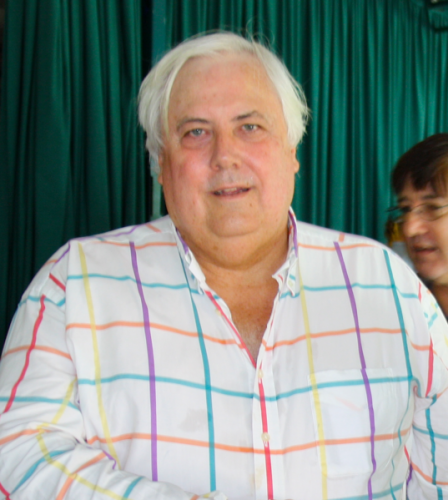 THE Chinese embassy lashed out at Clive Palmer’s extraordinary attack on Chinese “mongrels” and “bastards”, as a PUP senator went further than her leader, suggesting they might invade Australia.

Palmer’s outburst on ABC’s Q&A – in response to questioning about whether he used funds from Chinese state-owned company Citic Pacific for his election campaign – unleashed a torrent of criticism of him from across the political spectrum.

Palmer, who has been in bitter dispute with the company, said on Monday night: “We’ve had three [court] judgments … against these Chinese mongrels.” They were communists, “shoot their own people” and “want to take over this country and we’re not going to let them do it”.

The Chinese embassy said Palmer’s attack was “full of ignorance and prejudice”, and absurd and irresponsible.

As he came under general fire, Palmer on Twitter tried to cast his words into a more narrow context. “My ?#qanda comments not intended to refer to Chinese people but to Chinese company which is taking Australian resources & not paying.”

But PUP senator Jacqui Lambie said: “If anybody thinks that we should have a national security and defence policy which ignores the threat of a Chinese Communist invasion – you’re delusional and got rocks in your head.

“We need to double the size and capacity of our military right now,” she said, raising the spectre of “our grandchildren … becoming slaves to an aggressive, anti-democratic, totalitarian foreign power”.

Foreign Minister Julie Bishop said the Palmer comments were unacceptable for a member of Parliament and she planned to contact the Chinese embassy.

Treasurer Joe Hockey said while Palmer was in legal dispute with his Chinese partners, “I’d say to Mr Palmer, please do not bring down the rest of Australia because of your biases”.

Hockey said it was “hugely damaging” for Palmer to make such an attack. The Chinese were “our biggest trading partner, they buy a lot of our produce, and in doing so they help to lift the quality of life for everyday Australians.”

West Australian premier Colin Barnett, who has previously hit out at Palmer over his feud with the Chinese company, said his remarks were “appalling”, “racist” and very damaging to the Australia-China relationship.

Barnett said the company had paid its royalties in full and on time and Palmer was talking about its payment to him. Palmer was probably driven by greed, the premier said.

Shadow Treasurer Chris Bowen said that “it’s important that while we all engage in proper free speech and debate that we treat Chinese companies and individuals and government with respect”.

But WA PUP senator Dio Wang, who was born in China, defended his leader. “Having more than once given an appropriate answer to the questions put to him, Mr Palmer naturally reacted and used expressions that were subsequently taken out of context.”