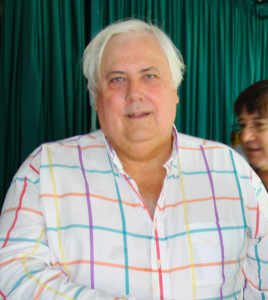 PUP leader Clive Palmer has made a grovelling apology to the Chinese for his extraordinary outburst on television, in which he referred to them as “bastards” and “mongrels”.

In a letter to the Chinese ambassador Ma Zhaoxu, Palmer said: “I most sincerely apologise for any insult to Chinese people caused by any of the language I used during my appearance on the ABC television program Q&A”.

Palmer said he regretted “any hurt or anguish” his comments might have caused any party and “I look forward to greater understanding for peace and co-operation in the future”.

On the program last week Palmer lashed out in response to questioning about claims that he had used funds from a Chinese state-owned company that he was doing business with to finance his election campaign. He said the Chinese government wanted to bring workers to Australia to “destroy our wage system”, and wanted to “take over our ports and get our resources for free”.

“I don’t mind standing up against the Chinese bastards … and I’ll be doing that,” he said.

He went on to condemn “these Chinese mongrels”, who were “communists, they shoot their own people, they haven’t got a justice system and they want to take over this country”.

His comments were trenchantly condemned across the political spectrum, but he didn’t move to retract them at the time.

Palmer said in his letter that “we always must have an open mind; an open mind allows us to put ourselves in the other person’s position and brings greater understanding and less conflict to the world”.

He said an open mind helped him understand why “people think the way they do and how we can avoid traps for better understanding.

“In keeping an open mind, I now come to the realisation that what I said on Q&A was an insult to Chinese people everywhere and I wish to assure them they have my most genuine and sincere apology, that I am sorry that I said the things I said on the program.”

He recalled his long involvement with China, which he said he first visited in 1962. He noted that Chairman Mao had said when celebrating the anniversary of the 1911 revolution, “words to the effect that over 45 years have passed since the 1911 revolution and China had only sought friendly relations with its neighbours.

“He went on to say that another 45 years would pass and China would continue to seek good relations with its neighbours and China has. It is in the interests of the whole world that Australia and China have good relations. All citizens of both countries must work towards a prosperous future by working together.”