OMAR Musa’s new book is a vernacular romp through the mean streets of Queanbeyan and Canberra that has attracted comparisons to Irvine Welsh’s “Trainspotting”, in part because it’s full of swearing, sex, drugs, and violence. 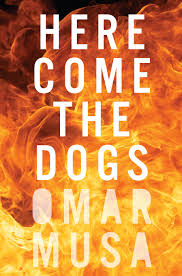 Part of the blame for that must also be laid at the door of the publisher for putting an endorsement by Welsh on the cover.

In theory, the setting is an anonymous “Town” near the “City”.

But there is this passage to really nail home the location:

“They walk hand in hand past the merry-go-round, past the restaurants with ironic menus and pink lemonade in jam jars, past the bus interchange and straight to the noodle house”.

The book is important just as an insight as to what it’s like to not fit into this city of overwhelming white privilege. And as a white, middle-class male it can be challenging in parts and, coming from that background, I have to admit to wondering where the chicken and egg lies in some of the written situations.

Did social exclusion drive the young protagonists to be drunk, on drugs, and smashing the teeth out of the heads of people they’ve met at the pub? Or are they excluded because of that behaviour?

Canberra is written in parts as a glittering and confusing place where bad things happen.

In one case the bad thing was a humiliation in front of a girl and passersby getting our paralytic hero into a taxi home. Some would think this was a pretty good result, really.

There is a hell of a lot in this book about hip hop music, it’s interesting in parts, at times confusing.

This almost seems sympathetic until our heroes, in the course of vandalising a site, violently assault a security guard just trying to do his job and run triumphant into the night.

On one reading of the book it would be possible to conclude the issue is not ethnicity but mental health.

The verse used to describe scenes of extreme intoxication is very effective when you get used to it with the same dreamy disjointed lurching sense most of us have experienced on a big night out.

That it, for the greater part, works is a real testament to the author’s skill.

Some reviewers, who one suspects have not actually finished the book, seem to think it is in some way about the 2003 bushfires. Fires are a very minor part of the story and nothing like 2003 in any detail aside from fire in the Australian summer.

It’s a good book about being young, confused, and angry in our part of the world. The characters are rich, and develop across the course of the book, which is a wonderful thing.

In short it’s a book every literate Canberran needs on their shelves (or in their e-reader) and it deserves to stand on its own in the sun, and not in the shadow of “Trainspotting”.