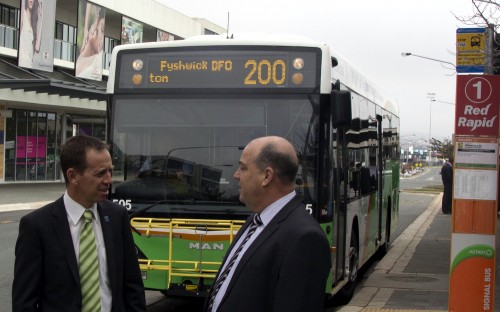 THE Green Shane Rattenbury yesterday did the honours for the completion of Gungahlin’s bus station.

The $3.325 million project to upgrade public transport facilities around the Gungahlin Town Centre precinct has been underway since July 2013.

“The completion of the project is great news for Gungahlin and an important step towards improving public transport infrastructure across Canberra, in time for ACTION’s new Network 14, and the commencement of light rail,” Shane said.

“The Hibberson Street bus stops have been replaced with a major, 30 metre long station providing improved shelter and seating as well as the installation of new bike racks. The project has also installed digital information displays which will utilise the ACTION’s new NXTBUS real-time information system.

Nathan Schmidt - January 22, 2021
0
Heatwave conditions forecasted for Canberra over the next few days won’t ease until Australia Day (January 26), according to the Bureau of Meteorology.