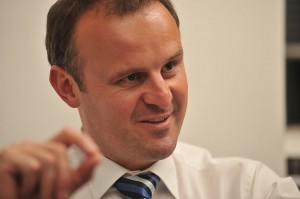 ANDREW Barr has announced the former Higgins Primary School, preschool and baby health centre is set to be redeveloped.

The Land Development Agency will engage a civil contractor to undertake the demolition of the existing buildings, with the site expected to be released to the market by the first half of 2016.

“New development on the site will be restricted to the provision of additional community facilities such as a retirement village, aged care accommodation, supportive housing and/or a childcare facility for the people of Higgins and surrounding suburbs. This is in keeping with community feedback received as part of extensive consultation activities undertaken in recent months,” Andrew said.

“I would like to thank all the citizens of Higgins and the surrounding areas for their input during the consultation process, especially Member for Ginninderra Yvette Berry MLA who played a significant role in reaching this agreement.”

“As a former Higgins resident, I knew how important the open space is and I was happy to have this confirmed through the hundreds of phone calls, house visits and the community meetings I held”, said Ms Berry.

“The decision to redevelop the school site and keep the oval for a community space will have benefits to our community. Higgins residents who I spoke with and engaged in the government’s consultation really need to be acknowledged, as does the ACT government for recognising these views in their decision. It’s a good decision and a decision that reflects what our community wanted.”

Andrew says the government is working closely with the tenants who remain in the existing buildings to ensure they are relocated to alternative premises with the least amount of disruption to the services they provide to the community.

While there was also consultation on the possible redevelopment options for the adjacent decommissioned oval, the government has decided not to proceed with any development on this site.

Michael Moore - May 27, 2020
0
"The overall evidence coming from NAPLAN results should be an embarrassment to this government. Toughing it out and making excuses will not help ACT school students," says political columnist MICHAEL MOORE.