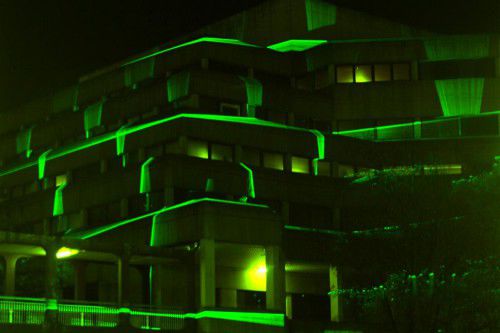 MINISTER for Arts Removal, Joy Burch, has announced she’s giving up on another treasured piece of public art.

LaserWrap, by artists Geoffrey Drake-Brockman and Richie Kuhaupt, will be decommissioned at the end of this month Joy says.

The work is a light display projected onto the ACT Health Building on the corner of Moore and Alinga Streets, Civic, from 20 lasers housed in three motorised projector boxes located on the rooftops of three nearby buildings – the GPO, Canberra House and Melbourne Building.

“When it was installed in 2004, LaserWrap was one of the first visual arts projects in Canberra incorporating light and imagery on a building,” Joy said.

“Sadly, the projector box on the GPO is no longer working and Canberra House is about to be demolished to make way for a new development.

“Given these factors, it was timely to review LaserWrap’s future as part of the ACT Government’s Public Art Collection and we have decided to decommission it.

“LaserWrap has played an important part in the development of public art in Canberra. We recognise the success of LaserWrap and thank the artists, Geoffrey Drake-Brockman and Richie Kuhaupt for creating the work for the Canberra community ten years ago.”

LaserWrap will cease to operate on 28 November 2014.