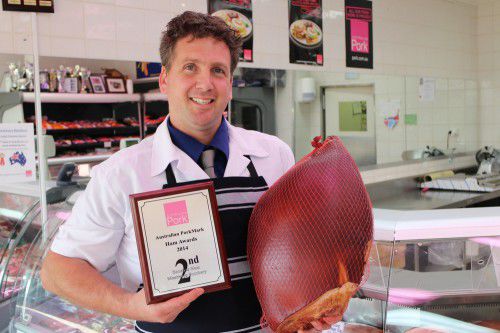 MEATWAYS Butchery from Kambah Village has shown that their ham is among Australia’s best.

Meatways Butchery took out 1st place in both boneless and bone-in ham for the ACT and placed 2nd nationally for their boneless ham in the prestigious Australian Ham Awards, held as part of Australian Ham Week which runs from 30 November to 6 December to celebrate and promote home-grown ham.

Cameron Fenson from Meatways Butchery said the award was recognition of the quality product they produce.

“The award means a lot to me as it shows that local quality independent butchers can produce the highest quality hand-made Australian smoked leg hams in the market,” Cameron said.

“We make our ham from Australian pork because of a number of reasons. Firstly, we know its origin and I can source the younger fresh pork. Secondly, I only purchase female pork in our shop because of its better flavour and tenderness.

“Ham is a Christmas favourite and I’m so pleased to know that we’re producing a top quality product that you can get your hands on here in Kambah. We have a very good reputation within the community for selling beautiful tasting hams and this latest award recognises this.

Australian Ham Week was developed in 2009 to raise awareness that not all ham sold in Australia is made from local pork. To guarantee your ham is Australian, buy bone-in or look for the pink PorkMark logo.

CityNews - April 7, 2020
0
The ALP and the Greens have legislated to deny an accused person in the ACT a basic right cherished and defended in liberal democracies for 800 years, namely the right to trial by jury. Shame on you, says letter writer Jon Stanhope.

Just when you think the world’s a terrible place…