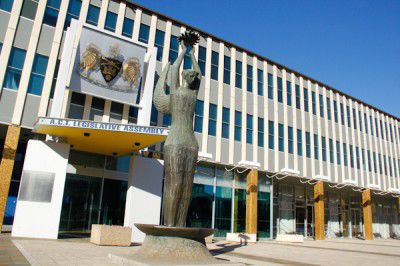 SIMON Corbell is celebrating the success in the major parties on agreeing to a new electoral system for the ACT with five electorates returning five members replacing the strange 5-5-7 system.

“Following the recommendations of the expert reference group, the Assembly has decided to increase its size from 17 to 25 members, and increase the number of electorates from three to five,” Simon said.

“As Canberra’s population has grown, it is appropriate to increase the number of representatives at a territory level to ensure the best government possible for the people of Canberra.

Next up will be a redistribution of electoral boundaries and the exciting new namings of the electorates.

There will be a call for public submissions by the Redistribution Committee.

The final determination of the new electoral boundaries will be made by the Augmented ACT Electoral Commission.

Meanwhile the Greens have expressed their desperate unhappiness.

“The 5 members in 5 electorates (5X5) model that was passed in the Legislative Assembly today is a poor outcome for democracy, and a wasted opportunity to enhance our electoral system,” Shane Rattenbury said.

“While the ACT Greens support an increase in the size of the Legislative Assembly, the 5×5 model benefits only the ALP and the Canberra Liberals while delivering a less democratic Assembly for the people of the ACT.

“Five member electorates will raise the quota to get elected, and will make it harder for independents and small parties to get elected, which will mean less diversity and community representation.

“The Legislative Assembly is a better place when we have a range of representatives from different backgrounds who put new ideas and thoughts on the table, challenge established ideas and encourage us to rethink how we govern.

“The Greens support a larger Assembly, and there were a number of options for how this could have been done while maintaining a balance between strong proportional representation and a workable parliament

“But the two old parties have not even entertained a different model to the one that’s been put forward today, and it’s clear why: it benefits only them. It benefits them more than it does the people of the ACT.

“We should never be threatened by the presence of other parties in this Assembly, and yet, as we pass a Bill to allow our Assembly to include more people, Labor and the Liberals have decided that we don’t want more types of people – just more people like them.

CityNews - January 17, 2020
0
NEW suburbs in the ACT no longer require a gas connection, allowing them the opportunity to achieve zero emissions and to have cheaper utility bills.