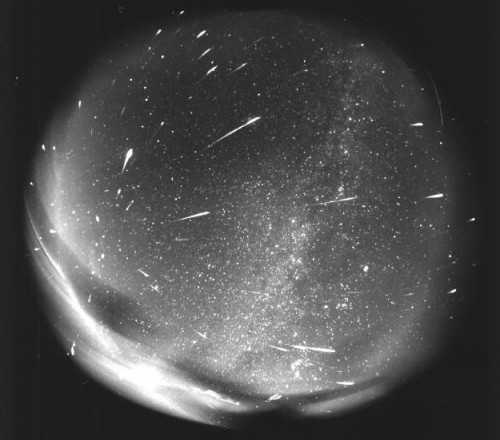 IF you’re willing to rise early tomorrow morning then there’s the chance to see a meteor shower, known as the Lyrids, which may been responsible for a bright light seen recently over Russia.

A dashcam videos captured a fireball in the sky over Murmansk and other cities in the country’s northwest Kola Peninsula over the weekend. Russian astronomer Viktor Troshenkov is quoted in some reports saying the bright flash was likely from the Lyrids meteor shower.

The Lyrids occur each year between the 16th and 25th April, with a peak expected overnight (22nd/23rd April). It’s a fairly consistent shower and typically around 15 or 20 meteors an hour can be seen, although that number is generally a little lower from here in Australia.

This is because the shower’s radiant, that point in the sky from which the meteors all appear to radiate from, is low in the north for Australian observers.

To find that radiant look directly towards the north, near the bright star Vega, which is the brightest star in the constellation of Lyra, the harp.

The Lyrids will seem to originate from a point just above and to the left of Vega. For those in the northern hemisphere Vega is much more prominent and can be found nearly overhead.

This year, the Lyrids will also be competing with the Last Quarter Moon, which occurs today on the 22nd. It is likely that some of the fainter meteors will be washed out by the Moon’s light.

But the good news is that enough Lyrid meteors have been known to be particularly bright and can even leave behind trails that remain in the sky for a split second.

There have also been occasions when an outburst has occurred. The last was in 1982, when almost 100 Lyrids were seen each hour.

Unlike many things in astronomy, the intensity of meteor showers is unpredictable, so you won’t know what happens unless you go out and look.

The cause of the Lyrids is Comet Thatcher, which orbits the Sun every 415 years.

The comet was closest to Earth in 1861, the year it was discovered, and it left behind a trail of debris.

It’s these tiny particles, as small as a grain of sand, that the Earth is now moving through. As the comet debris travels through Earth’s atmosphere at up to 75km/s, the intense heat produces the streaks of the meteor shower.

The Lyrids may not be one of the most spectacular meteor showers for Australians, but it does have a long history here.

The shower is mentioned in the strong astronomical traditions of the Boorong clan from the region around Lake Tyrell, in north-west Victoria.

The clan no longer exists today as a separate entity, but they were a member of the Wergaia speaking people from the Kulin nations.

For the Boorong, the bright star Vega was prominently known as Neilloan, the Mallee fowl. Neilloan is seen in autumn coinciding with the time the Mallee fowls start to build their elaborate nests.

The meteor shower is described as Neilloan kicking up the shooting stars in the same way that the earth-bound Mallee fowl are digging out their nesting mounds and kicking up sand and dirt.

The great thing about meteor showers is that all the equipment you need is warm clothing (if it’s going to be cold where you live) then simply find a comfortable spot, where you can lie back and look towards the northern sky.

And while you’re waiting for meteors, there’s great planet watching to do as well.

Saturn will be high overhead near the constellation of Scorpius, bright red Mars can be found setting in the west and Venus will be rising in the east as the brilliant morning star.

Tanya Hill does not work for, consult to, own shares in or receive funding from any company or organisation that would benefit from this article, and has no relevant affiliations.