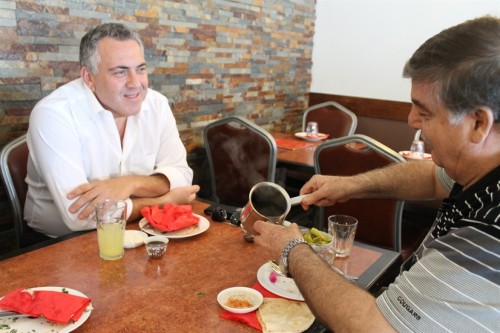 DESPITE its temporary income tax levy and the reintroduction of petrol excise indexation, Treasurer Joe Hockey’s first budget will reduce taxes by $5.7 billion in 2014-15.

As it braces itself for a political onslaught against its specific tax hikes, user charges and swingeing cuts, the government will boast that within a year, it has cut the overall tax burden on the Australian economy.

This includes its yet-to-be-legislated repeal of the carbon and mining taxes and clearing a backlog of measures from Labor and earlier governments that had been announced but not enacted. The budget will introduce 67 tax changes, many scrapping or changing ALP decisions.

Budget eve saw positioning on all sides, with another video from Hockey (no cigar in sight) and a pep talk to Coalition staff by Prime Minister Tony Abbott.

Clive Palmer got into the act by flagging a private member’s bill to link the entitlement age for the pension with the parliamentary pensions offered to MPs. He was highlighting PUP’s opposition to the budget plan to raise the pension age to 70 by 2035.

The Greens at their party meeting took the internally controversial decision to oppose the budget’s temporary tax on the rich.

This was very much a captain’s call and is not likely to go down well with the party’s rank and file because the Greens’ policy is for progressive taxation.

Leader Christine Milne, who has consistently attacked the tax rise, dug in her heels at a difficult meeting. She was not prepared to have the party negotiate with the government over the temporary levy. In a statement later she said: “We won’t support temporary political fixes that are nothing about delivering for the community and all about paying for Mr Abbott’s three-word slogans. There is no budget emergency.”

But, in what was seen as a semi-compromise, the Greens “left open the option for permanent increases in taxes on the wealthy if the Abbott government wants to get serious about progressive structural tax reform”.

The Greens will, however, support the restoration of fuel-excise indexation, although Milne said they did not like the money hypothecated for roads.

Meanwhile, Labor declared unequivocally that it will oppose the planned $7 Medicare co-payment, seeing it as one of the most politically vulnerable points in the budget.

Shadow treasurer Chris Bowen indicated the opposition will vote against the co-payment (as long as it is not embedded in appropriation bills so that opposing it would mean voting against supply). “We would oppose any moves to pay to go to the doctor. That would be a fundamental attack on Medicare and we will fight to protect the universality of Medicare,” Bowen said.

He left vague what attitude the ALP will adopt on the income tax hike for the rich and indexation of the petrol excise.

The co-payment, to start July 1 next year, will be one of the hardest sells for the government in a budget full of them. More than eight in ten GP services are bulk billed, so the patient pays nothing.

The Australian Medical Association has been critical of the co-payment plan. The AMA says it would mean that some people who should seek early intervention would be discouraged – although, in an apparent contradiction, it also predicts that after an initial period there would not be much of a fall in visits.

The AMA is especially concerned about the implications for four groups: Indigenous people, low-income earners, those with severe mental problems and the aged.

The government would reap its savings by cutting the rebate by some $5, leaving the doctor with part of the co-payment as a sweetener. Doctors would have discretion in waiving the co-payment – putting them in a rather invidious position – and to protect the chronically ill, it would not apply after a certain number of visits. The Commonwealth would negotiate with the states for a co-payment in the emergency departments of hospitals for non-emergency cases.

One aim of the co-payment is to curb perceived overuse, but whether and to what extent this occurs is a matter of dispute. Tony Shepherd, head of the Commission of Audit, recently ran into trouble when he used incorrect figures to claim there was a high average rate of visits to the doctor.

Judgement about this budget will much depend on the priorities of those doing the judging. We asked four observers for three questions that should be asked in assessing it. Here are their answers.

Jennifer Westacott, CEO of the Business Council of Australia: