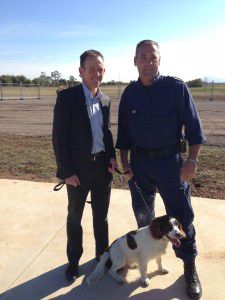 SHANE Rattenbury today met the newest members of the ACT Corrective Services K9 Unit, ‘Teddy’ and ‘Boone’, who are currently undergoing a 12 week intensive training course before they join the ranks at the AMC.

“Teddy and Boone will be subject to a strict training regime prior to being placed in active corrections based service as Passive Alert Detection Dogs. By the end of their training they will be able to detect all forms of illicit substances,” Shane said.

“Teddy and Boone are English Springer Spaniels, a breed commonly used as sniffer dogs by various law enforcement organisations as they are highly adaptable and capable of working in various types of detection, including firearms, explosives, cadavers and narcotics.

“Last year, the search work done by ACT Corrective Services detector dogs led to approximately 30 seizures of narcotics, as well as a number of interceptions of mobile phones and drug paraphernalia.

Passive Alert Detection Dogs are part of a range of measures ACT Corrective Services has in place to detect and prevent the entry of drugs and other prohibited items into the AMC, along with the use of metal detectors, X-Ray, and physical searches of vehicles.