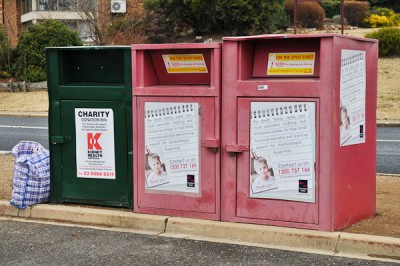 SHANE Rattenbury has unveiled a new code which he hopes will reduce the incidence of illegal dumping at charity collection bins around Canberra.

“The Code of Practice for the Management of Charity Donation Bins in the ACT aims to achieve a balance between allowing charities to use bins to receive donations to support those in need, while also mitigating against illegal dumping and best allowing the ACT Government to undertake enforcement activities,” Shane said.

“The new Code will see all charity bins relocated from Canberra’s current 55 neighbourhood centre locations to 14 identified group centres, with the exception of those outside a charity shopfront.

“Charities will be able to register their interest in the locations and, once approved, will be required to clearly label the donation bin with the name of their charity, a list of the items that can be donated, information on how the items will be used, an instruction not to leave items outside the charity bin and a 24-hour on-call number to report issues such as illegal dumping or damage.

“Other requirements include removing rubbish within 24 hours of it being reported and undertaking regular maintenance of the bins to ensure they are kept free of graffiti. The placement of charity bins will be done in a manner which limits adverse impact on visual amenity, pedestrian and vehicle access or existing landscaping and each bin will display a sticker providing a clear message that those caught illegally dumping at charity bins will be prosecuted.”