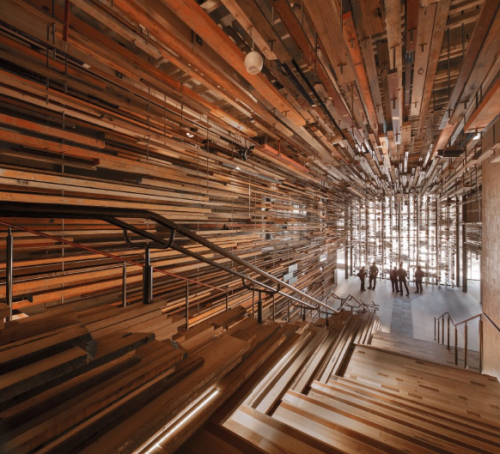 NEW ACTON’s Nishi building has been recognised for its display of timber in winning the title of “Best Commercial Interior” at the 2014 Intergrain Timber Vision Awards.

The building combines residential and commercial use with retail, hotel and residential zones.

According to the panel of industry professionals including Elizabeth Watson-Brown, Design Director at Architectus; Scott Walker, Head of Design – Interiors at Hassell Melbourne; Cameron Bruhn from Architecture Media and Phil White, General Manager – Dulux Trade, despite the competitive shortlist of designs, Nishi showcased timber innovation at its finest.

Intergrain Brand Manager – Trade, Amanda Chalmers, said the calibre of submissions and number of entries for the Intergrain Timber Vision Awards 2014 has reached a new high.

“The timber featured in the Nishi project and the other winning entries really pushed the boundaries of timber vision and innovation, this year.” Amanda said.

“We hope this win will inspire more experimentation with timber in Canberra and deliver more inspirational timber visions in years to come,” she added.

Andrew Mathieson - March 5, 2021
0
A further two travellers from a repatriation flight have been placed in isolation amid concerns that a number of returning Canberrans from overseas could also be affected and test positive for coronavirus.