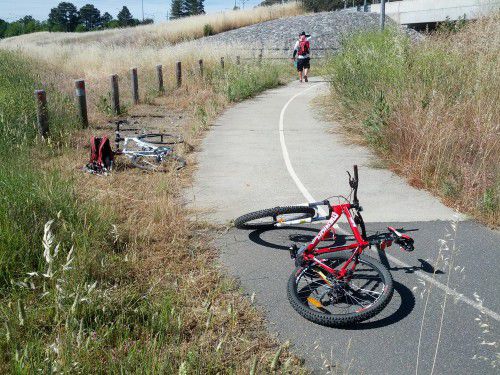 Ben has had an unfortunate run in on the bike path and has sent in the picture and the tale:

You can see there was a big crop of weeds blocking the path, so he came out around the corner from the Barton Hwy underpass on the wrong side. I tried dodging to the left, but there wasn’t enough time. We collected shoulders and I fell into the weeds on the LHS of the photo. The guy walking away from the photo was the other victim.

I suggested we swap details after I took the photos, but he said he was uncomfortable doing that. I pushed it further, but he declined and rode off. At that point I noticed my frame was bent, and rode after him. I caught up with him to mention the frame, and he said he had no gears. I wasn’t getting his details and that was “his prerogative”. At that point I turned and rode back to the accident site to call the police – which was useless as they couldn’t do anything without his identity.

UPDATE: Ben’s had more to say:

The other cyclist was riding the red Merida “Matts” mountain bike.

He was probably around 5’7″ in height, with a roundish shaped face. I think he had a shortish length brown beard or stubble. His hair was a similar colour, although was mostly concealed under his black helmet.

I saw his face a few times as his brown sunglasses were knocked off during the crash.

He had a short, somewhat stockier build. He mentioned he was getting back into cycling after having recently had lower back surgery to fuse some lower vertebrae.

The matter has been reported to police so if the description sounds familiar contact Crimestoppers.

Paul Costigan - March 2, 2021
2
"At the core of the Coolo Park fiasco is how an unresponsive bureaucracy controls the ACT’s politicians at the expense of common sense, community aspirations and the future of this city in a landscape," writes "Canberra Matters" columnist PAUL COSTIGAN.