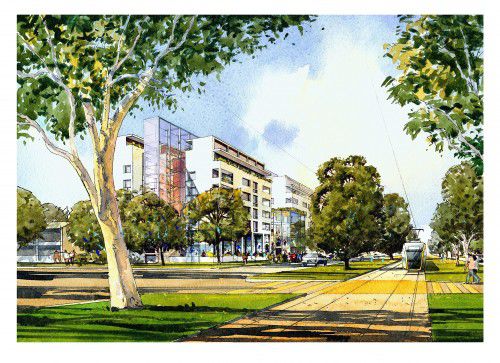 ANDREW Barr has announced he’s kicking off the long awaited redemption of Canberra’s gateway along Northbourne.

“Once the DA has been approved, the Land Development Agency will engage a civil contractor to undertake the demolition of the flats, and later this year the site will be released to the market in accordance with thegovernment’s land release program.

“It is anticipated that the new development on the site will include up to 160 one and two bedroom apartments replacing the existing 21 single bedsitter flats which have reached the end of their useful life. All Dickson Flats tenants have been relocated.

“Design controls will ensure the heritage significance of the precinct is respected.

“In accordance with the Territory Plan, the new buildings will be modest in height with a maximum of eight storeys; however one will be four stories to reflect the original design of being a gateway to the Northbourne Housing precinct.

“To further preserve the historical significance of the Dickson Flats, the LDA has worked with Ancher Mortlock and Murray, Sydney Ancher’s original firm, as well as local architectural firms, to prepare design guidelines that reflect the original post war modernism design but interpret it from a 21st century perspective.

“This is an exciting time in the revitalisation of Northbourne Avenue and I look forward to watching this project unfold in coming years.”

Full details of the proposed development are available on the LDA website www.lda.act.gov.au.