HERE at “CityNews” we have no idea what contemporary feminist thinking is about poet/sermoniser John Donne, but we can guess. 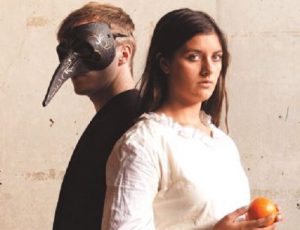 Now news is to hand that those iconoclastic folk at NUTS – the National University Theatre Society – are staging a play based on his notorious poem full of sexual innuendo, “The Flea”.

“One Flea Spare” is billed as “fiercely humorous with often dark and sensuous undertones. Set in plague-ravaged 17th Century London, a wealthy couple is preparing to flee their home when a mysterious sailor and a young girl appear, sneaking into their boarded up home. Quarantined for twenty-eight days within the walls, the unlikely residents are left to test other boundaries. Outside, the watchman stalks the streets like death itself, while inside, the structures that once held society together are rattled to their core.”

Naomi Wallace’s 1997 OBIE award-winning play, NUTS directors Ellie Greenwood and Gowrie Varma, are betting that this “probing and fearless” play will not fail to challenge and delight.

It looks as if this, the second production in the season, “A Stage of Her Own”, celebrating female writing, offers good parts for both genders – the actors are Cheski Walker, George Mitton, Andrew Eddey, Sarah Heywood and Lewis McDonald.

“One Flea Spare” at the Drama Lab, ANU Arts Centre, Union Court, May 14-17 at 8pm. Bookings to trybooking.com/EVQF

CityNews - August 3, 2020
0
A Calwell woman, who was allegedly in possession of methylamphetamine, attempted to flee from a ride-share vehicle when police stopped it yesterday (August 2) morning