“I love to try plants that people say will never survive here – I like the challenge of bringing a rainforest plant to frosty Canberra,” says Brad.

“In many cases, these plants can adapt to different settings and while winter can be tough, by and large everything has come through well,” says Brad.

The steep, semi-rural garden blends into the bushland that surrounds it on two sides, and will be open to the public on the weekend of October 25-26, with more than 70 acacias and grevilleas in a stunning spring display.

Austrian sculptor Andreas Buisman has also installed more than 50 of his rock sculptures in the space for the open garden, many of which will be for sale.

When Brad and his wife Sue first started the garden in 2003, he says it was a “skeleton block with scattered large eucalypts and not much understory”.

Brad attributes his success to allowing the block to evolve over time, and watering via drip irrigation and hand-watering.

“We have 9000 and 2000-litre rainwater tanks and use water retention methods, like channeling runoff along drainage lines into swales and ponds – we think it’s worth investing in the cost of water to create an environment we love,” he says.

As the garden develops, Brad says the number of bird species that visit is also increasing, including magpies, noisy friarbirds and red wattlebirds. “The kangaroos visit often too, and they come quite close, especially in the summer when their minds are focused on cooling down and finding a drink,” says Brad.

“It’s cool and shady down in the gully in the summer, so it’s a favourite spot of mine, too, and I enjoy seeing the plants that don’t normally work, and think, yes! We did that.”

Brad Pillans’ garden at 30 Aspen Rise, Jerrabomberra, will be open on Saturday, October 25 and Sunday, October 26, 10am-4.30pm. Adults $8, children under 18 are free. Funds raised will go to the National Rock Garden and Open Gardens Australia. More information at www.opengarden.org.au. 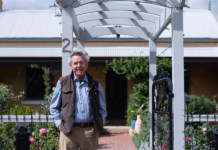 CityNews - January 23, 2020
0
PEOPLE in Beard, Oaks Estate and West Queanbeyan (including Crestwood) have been told it's too late to leave and that the Pialligo Redwood Forest fire poses a threat to all lives in its path.