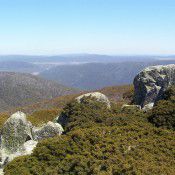 THE ACT will celebrate World Environment Day this Thursday 5 June 2014 with two very special anniversaries – 30 years since the announcement of the declaration of Namadgi National Park, and 100 years since the Cotter River Ordinance was passed.

Regional Manager, National Parks and Catchments, Brett McNamara said the Cotter River Ordinance played a huge part in the development of Namadgi National Park and other parks in the ACT and laid foundations for the ACT Parks and Conservation Service.

“When it passed in 1914 the ordinance was one of the first pieces of legislation in our fledging Territory designed to protect and conserve the Cotter catchment area. To enforce the ordinance rangers were appointed,” Mr McNamara said.

“In 1984 Gudgenby Nature Reserve and the Cotter catchment were consolidated to form Namadgi National Park. The vision for a national park for the nation’s capital was finally realised.

“Today Namadgi National Park boasts over 106,095 hectares of parkland and 160 kilometres of walking tracks to discover. Our national park offers remote wilderness experiences, a wide range of natural environments, an abundance of native wildlife and a number of Aboriginal and European cultural sites.

“There are many reasons to visit Namadgi National Park, but with this year celebrating 30 years since its declaration, now is a great time to celebrate the wonderful landscape the ACT region has to offer.”

For those looking for guided walks and other events in ACT parks and reserves, the Explore guide can be downloaded online at www.tams.act.gov.au or picked up from all Canberra Connect shopfronts, the Canberra and Region Visitor Centre or the visitor centres at Namadgi and Tidbinbilla.