AS the years go by, governments of all persuasion and all levels are finding new and despicable ways to tax people. That’s the certainly the case here in the ACT.

I don’t believe they’ll ever tax us for the air we breathe, but having the seen the predicament facing local golf clubs and their water charges, I’ve perhaps spoken a little too soon.

Would an ACT Government really tax a sporting club for the rain that falls from the sky? Yes, it does. For some years ACT golf clubs have been paying large bills for using the water from their own dams.

Last month Treasurer Andrew Barr wrote to golf clubs in the ACT advising them of a thing he’s calling the Market Equity Scheme. He suggested that this amazing new scheme would provide a 50 per cent discount on water abstraction charges for the water that the golf clubs take from their own dams. It’s my understanding that this doesn’t occur anywhere else in the country.

I find it bizarre considering that, during the recent drought, golf clubs were encouraged by the powers-that-be to invest in water-saving infrastructure.

I know that, in particular, the Murrumbidgee Country Club spent a lot on dams and water-saving hardware that is now biting it on the bum. The investment has become a shallow one with the Government’s decision to apply the water-abstraction charge to the water the club’s collecting.

Any ACT club that draws water from an on-site dam pays $250 per megalitre. In NSW that water is free.
Ron Shepherd, president of the Murrumbidgee Club, is ropable, telling me that the club “harvests stormwater from the surrounding residential area, and our golf course.”

“The ACT government are responsible for the maintenance and upkeep of the waterways and the storage dams that store water that we will now be charged to extract,” he says.

This all seems a little odd because, on the one hand, we’ve been encouraged to find ways to save and store water, and now golf clubs are being charged for it. Am I to assume that a water abstraction charge will soon apply to domestic tanks?

I’m unsure where this will end, but I know that the Murrumbidgee Club is keen to stand firm and simply refuse to pay the charges. This could get very interesting. 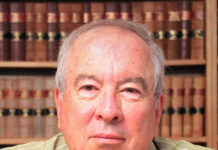 Belinda Strahorn - October 19, 2020
0
A CENTURY of pioneer history will be lost, if two historic huts severely burnt in January’s bushfires are not rebuilt, a volunteer group has warned.

Labor flags as wild cards make a run for the line

Greens pledge to get more people growing their own food