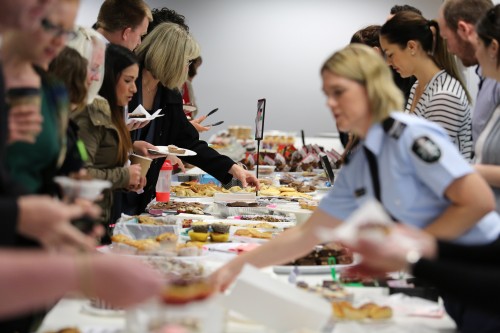 HUNDREDS of public servants based in Barton have hosted ‘Barton’s Biggest Bake Sale’ to raise money to respond to the humanitarian crisis in Syria. APS staff from the Attorney-General’ Department, the Department of Prime Minister and Cabinet and the Australian Federal Police have baked muffins, brownies, cakes and slices for the “No Lost Generation” appeal.

The fundraising event was launched by the Attorney-General’s Departmental Secretary Roger Wilkins, and included an address by Yassmin Abdel-Magied, the founder of Youth Without Borders and 2010 Young Queenslander of the Year.

Attendees heard that over 5 million Syrian children are affected by the conflict in Syria. More than one million have been forced to flee their country and neighbouring nations are struggling to absorb the influx of refugees.

The bake sale will continue until 3pm today at 4 National Circuit, Barton. City News understands there are still a lot of baked goods available for sale.