NUTS is the politically incorrect name of the National University Theatre Society which from tonight until Saturday is presenting a fairly incorrect play in Paula Vogel’s 1998 Pulitzer prizewinner “How I Learned to Drive.” 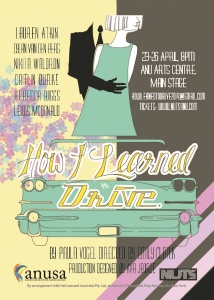 Several years ago the play shocked the socks off patrons at Canberra Rep with one audience member confiding to me after the show that she would again never be able to look at the actor who played, sympathetically, the child-abusing uncle’s role – a bit unfair on an excellent performer I thought at the time.

“How I Learned to Drive,” NUTS says, “is a powerful and provocative exploration of one woman’s journey toward adulthood. Told with tremendous creative innovation, Vogel interprets difficult themes, such as the enduring effects of child abuse, with a resilience underlined by humour.”

Although the play is certainly makes use of male actors, NUTS has declared that 2014 season will celebrate the diversity of women’s contribution in theatre by featuring the works of female playwrights.

“How I Learned to Drive,” ANU Arts Centre 8pm, April 23-26, bookings at trybooking.com/ERCG