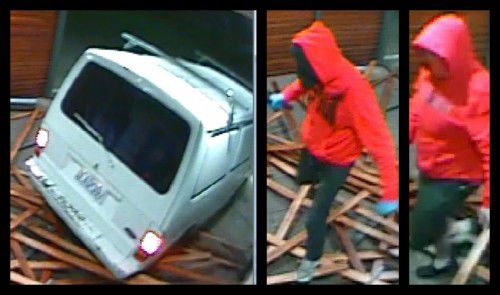 ACT Policing is seeking witnesses after a van was used to damage property in Kaleen early yesterday morning (Wednesday, 18 June).

Around 1:30am, a white van entered the car park of the Kaleen Club, Georgina Crescent, Kaleen.

The van drove a circuit of the car park and then reversed into an outdoor smoking area.

The two occupants exited the van and moved towards the entry door and attempted to break into the club.

The driver of the van is described as being medium to heavy build, about 175 cm (5’9”) in height. At the time of the incident he was wearing a red ‘hoodie’ with a red cloth covering his face.

The passenger of the van is described as over 190 cm (6’3”) in height with a thin build. At the time he was wearing black pants and a red ‘hoodie’ with a black cloth of his face.

Police are urging anyone with information about the incident or can identify the two people in the CCTV footage to contact Crime Stoppers on 1800 333 000. Information can be provided anonymously.