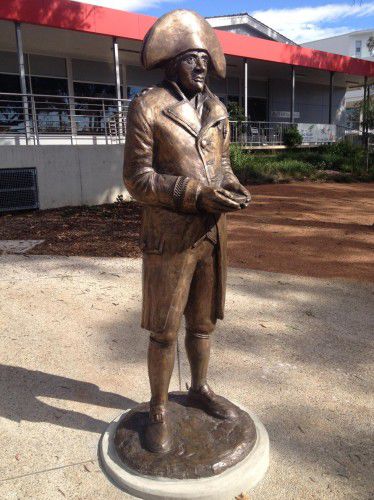 JOY Burch has unveiled a new public art sculpture which was almost destroyed in a studio fire at Red Hill Shops.

The sculpture of French explorer Jean-François de Galaup, compte de la Pérouse, who landed in Botany Bay the same week as the First Fleet, still bears the scars of the near-disastrous fire.

“This sculpture has undertaken quite a journey of its own and has been brought back from the ashes to add a little piece of history to its own story, now and in the years to come,” Joy said.

“If you look closely at La Perouse’s back, you can see the scorch marks left behind in the plaster model. I am delighted that he has now been installed and believe he will be a well regarded asset of the ACT Government Public Art Collection.”

Braidwood artists Suzie Bleach and Andrew Townsend had almost completed the cast for the bronze sculpture, which was funded under the 2010-12 Shopping Centre Upgrade Program, when a fire broke out in their studio, causing extensive damage to the cast. However, they were able to save the sculpture.

La Perouse was an accomplished early Dutch explorer in command of a French expedition of reconnaissance to the Pacific in 1785.

“Red Hill streets are named after early maritime explorers and ships visiting Terra Australis, and it is only fitting that this sculpture is located on La Perouse Street,” Ms Burch said.

“I would like to thank Suzie Bleach and Andrew Townsend for their efforts in creating this artwork.”

Helen Musa - May 27, 2020
0
Arts editor HELEN MUSA rounds up another day in the arts in Canberra.