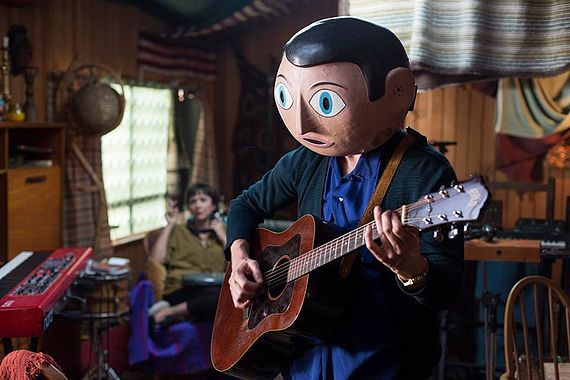 IN the overture to Leonard Abrahamson’s film from a screenplay by Jon Ronson and Peter Straughan (knowing that their previous collaborations include “The Men Who Stare At Goats” will surely prepare you for offbeat comedy), office-worker Jon (Domhnall Gleeson) jogs along a suburban street composing as he goes and singing about what he sees, the people he passes.

This is preparation for a wonderful wacky comedy set among musicians and exploring the idiosyncrasies of an eccentric musical genius whose face none of the other players in the nascent band Soronprfbs has ever seen. Frank (Michael Fassbinder), a tortured soul loosely based on real-life British comic TV personality Frank Sidebottom (Chris Sievey), permanently wears a large papier-mâché mask covering his head.

Learning that Jon can play C, F and G, Soronprfbs frontman Don (Scoot McNairy) recruits him to play keyboard in a house beside an Irish lake he has rented to make a recording in which Frank wants to incorporate all manner of wild sounds. None is weirder than those of the theremin, an early electronic musical instrument controlled without physical contact by the performer, played by magnificent Maggie Gyllenhaal as Clare whose unbridled lack of anger management is perhaps the film’s second-most-important conflict generator after Frank’s control-freak behaviour.

The comedy is subtle, intelligent, unabashed, vigorous and pervasive. The plot none-too-subtly satirises social networking and the obsession for inventing a new musical style. While the music In “Frank” is not my style, the movie certainly is.

CityNews - May 31, 2020
0
ONE man was arrested early this morning (May 31) and another two people are two being sought after a shooting in Dunlop last night.