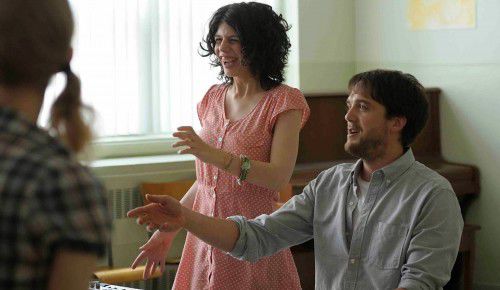 THE genetic disorder Williams syndrome occurs in perhaps one in 20,000 births.

Canadian francophone filmmaker Louise Archambault has made this fictional drama less to proselytise about it as a social issue than to tell how Gabrielle (Gabrielle Marion-Rivard) and Martin (Alexandre Landry) cope with it after love intrudes on their innocence.

The pair meet in a musical group (musicality characterises many sufferers). Martin lives with an overprotective mother. Living in a group home, Gabrielle craves independence and babies. Her sister Sophie (Mélissa Désormeaux-Poulin) ferries her around Montreal on the pillion of her moped but will shortly travel to join a lover teaching in India.

The film gently guides us through Gabrielle’s yearnings, affectionately demonstrating her lack of competence once that first joyous rapture inevitably gives way to daily realities.

Martin defies his mother’s restrictions and rejoins the choral group preparing for an open-air concert under the tutelage of noted Canadian singer Robert Charlebois. Privacy under the temporary stage before the performance exposes the lovers’ vulnerability to unforeseeable consequences.